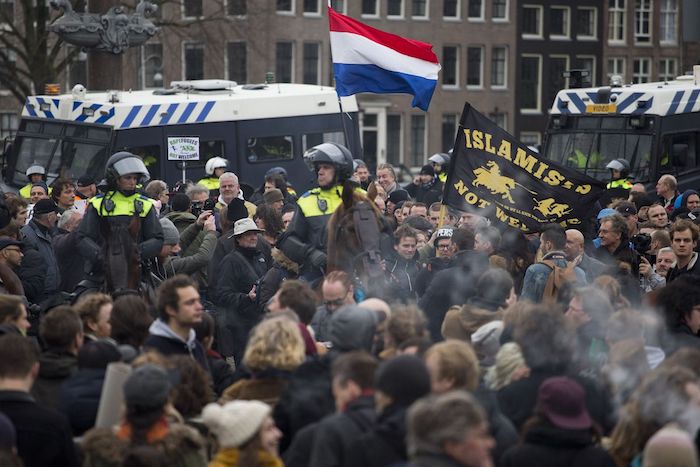 In a recent report on the rise of “right wing extremism,” the Dutch Intelligence Service, AIVD, inadvertently admitted that leg wing activists were actually significantly more likely to engage in violence:

Right-wing extremists in the Netherlands are increasingly vocal about encouraging and glorifying violence against Muslims and the government in particular, intelligence service AIVD said in a new publication. While this group seldom resorts to physical violence, the AIVD is concerned about the climate arising in the Netherlands, NU.nl reports.

The main focus among right-wing extremists is currently on anti-Islam ideas, where in the past it was more neo-Nazi, fascist and anti-Semitic ideas. Furthermore, the alt-right vision has spread from the United States and is trying to root into Dutch society and public administration, according to the AIVD. Due to the use of social media, there is also more and more ‘disorganized’ right-wing extremism, instead of more or less defined groups as in the past.

The use of language among right-wing extremists is becoming increasingly violent and they show a great fascination with weapons, the AIVD said. Generally speaking, this group does not quickly resort to violence, but the risk of individuals or small groups doing so is greater than in the past, the service warned.

In this report the AIVD spoke of right-wing extremism if “the definition of extremism is met and one or more of the following ideas are central” – xenophobia, hatred of foreign elements, and ultra-nationalism.

Clearly, Dutch “Intelligence” has intentionally defined “extremism” in such a way that left wing liberals cannot be considered “extreme” simply because they are for open borders.  Anyone in the Netherlands who believes that they have national borders that actually mean something are “extremists” and need to be monitored by the Dutch equivalent of the CIA/FBI.

Even though there is virtually no history of right wing violence in the Netherlands, the intelligence service is far more concerned about them than they are about known violent liberal agitators.  We see this all over Europe and even in America with the brazenly violent Antifa.

Is the public so brainwashed that they actually believe conservatives are more violent prone that liberals?