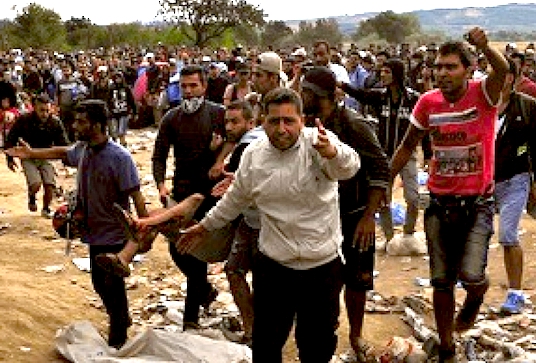 Up until October 1st, the Dutch immigration and naturalization service IND paid over a million euros in penalty payments to asylum seekers and refugees this year due to too slow procedures:

Up until October 1st, the Dutch immigration and naturalization service IND paid over a million euros in penalty payments to asylum seekers and refugees this year due to too slow procedures. That amount is likely to quadruple by the end of this year, because thousands of claims have not yet been handled, the Volkskrant reports based on figures from the IND.

By law the IND has six months to make a decision on an asylum family reunification request. But due to a backlog, these procedures now take almost a year. If the decision period expires, asylum seekers and refugees waiting on a decision for their family reunification request can file a so-called notice of default. If the IND does not respond within two weeks, the claimant automatically gets a penalty payment. It starts at 20 euros that later increases to 40 euros per day, until the maximum amount of 1,260 euros is reached, according to the news paper.

This year, up to the last figure date of October 1st, a total of 1,036,438 euros was paid out to asylum seekers based on 1,080 completed notices of default. Another 3,610 notices are still awaiting handling.

According to the Volkskrant, the main reason for the backlog is that the IND is understaffed. Extra employees were hired in 2015, due to a massive influx of asylum seekers from Syria. But the organization was slimmed down again after that influx stagnated. This was done without taking into account the many family reunification requests, the newspaper writes.

The IND told the Volkskrant that “every asylum case is treated carefully”. The service’s priority is currently on dealing with applications filed by people from safe countries and repeated asylum requests. This means that other cases are left waiting. A spokesperson stressed that the service is doing everything it can to recruit new staff, but that is difficult due to the shortage on the labor market.

If the Netherlands had any sense of self-preservation, every single asylum application from a non-White, non-Christian would be rubber stamped ‘Rejected” per forma.  Every asylum seeker would be put on commercial flights back to their home countries and told never to return.  These free flights would cost the Dutch far less than these ridiculous payoffs to these fake migrants.  Let them hire attorneys in their home countries and see how far their bogus applications get in the international courts.

The cost of these migrants to the Dutch taxpayers is staggering.  Even before the migrant crisis of the last 10 years, the tax rate in the Netherlands was among the highest in all of Europe and the entire world.  But this form of socialism didn’t destroy the country because it still had a homogeneous White population.  With this huge influx of non-White Arabs and Africans, their social experiment is going to implode and go bankrupt within one generation, as an ever-shrinking White middle class disappears and slowly morphs into a brown permanent under class.