Each Non-White Refugee Costs U.S. Taxpayers a Minimum of $80,000 to ‘Resettle’ 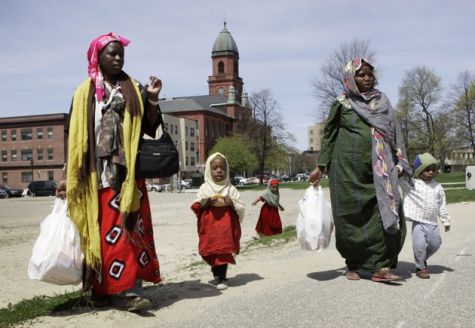 If diversity is our “strength,” it will also be our financial undoing, as a new study by the Federation for American Immigration Reform shows the hidden staggering costs to U.S. taxpayers to “resettle” these undesirables:

According to a new study released by FAIR, the annual cost to U.S. taxpayers is $1.8 billion and over five years, that financial burden skyrockets to $8.8 billion.

Those figures are only estimates because refugees will access welfare and other government assistance at different rates and the number of refugees entering the U.S also changes from year-to-year.

Using the most recent admissions figures, data on federal and state public assistance programs, and information from the Office of Refugee Resettlement (ORR), our analysis found:

–The cost per refugee to American taxpayers just under $79,600 every year in the first five years after a refugee is resettled in the U.S.;
—In 2016, the State Department spent nearly $545 million to process and resettle refugees, including $140,389,177 on transportation costs;
—Of the $1.8 billion in resettlement costs, $867 billion was spent on welfare alone;
—In their first five years, approximately 54 percent of all refugees will hold jobs that pay less than $11 an hour;
—$71 million will be spent to educate refugees and asylum-seekers, a majority of which will be paid by state and local governments.
—Over five years, an estimated 15.7 percent of all refugees will need housing assistance, which is roughly $7,600 per household in 2014 dollars.

It is important to note that this analysis does not address the costs associated with any incurred national security and law enforcement costs associated with some refugees who pose a threat. The total price of additional vetting and screening expenditures, law enforcement and criminal justice costs, and federal homeland security assistance to state and local agencies is hard to quantify.

As this study points out, these “resettlement” costs do not include the cost of law enforcement that results from the staggering amount of related crime that these refugee invaders bring with them.  Just one rape or murder can cost hundreds of thousands to investigate and prosecute.   The cost of incarcerating these felons is also mind-numbingly expensive, reaching into the tens of millions every year as our prisons are filled to the breaking point with these fake “New Americans.”

And America doesn’t “need” a single one of these refugees, as we have millions of Americans who are already qualified and willing to do whatever these new arrivals can do.  Yes, America was built by immigrants — but they were White Christian immigrants for whom the Founding Fathers conceived this country.  Whites had a common European history and destiny which non-White non-Christians do not and will never share.  The only “benefit” these refugees bring to America is division, strife, poverty, racial tension, fear, distrust, and ultimately violence, which is why the Jews want them here so badly.