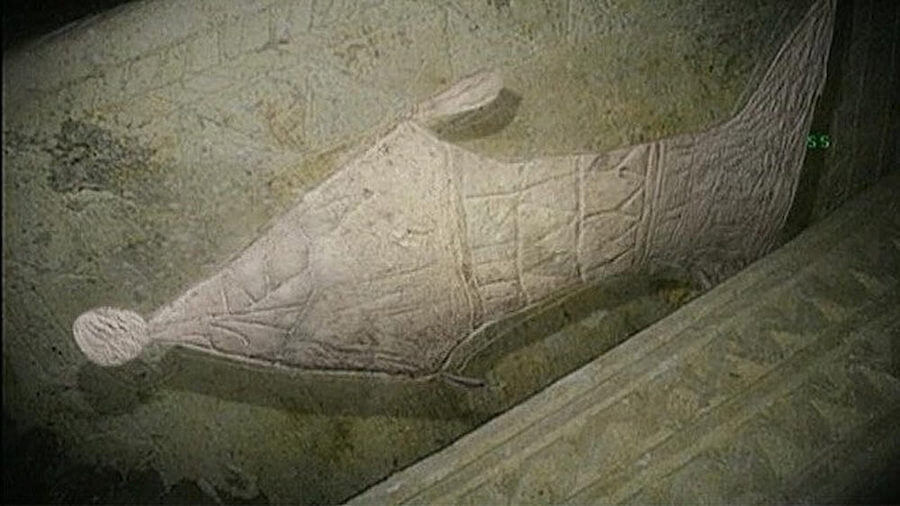 Archeologists continue to uncover evidence that supports what is written in the Bible:

The archaeological examination by robotic camera of an intact first century tomb in Jerusalem has revealed a set of limestone….ossuaries or “bone boxes” that are engraved with a rare Greek inscription and a unique iconographic image that the scholars involved identify as distinctly Christian.

The four-line Greek inscription on one ossuary refers to God “raising up” someone and a carved image found on an adjacent ossuary shows what appears to be a large fish with a human stick figure in its mouth, interpreted by the excavation team to be an image evoking the biblical story of Jonah.

In the earliest gospel materials the “sign of Jonah,” as mentioned by Jesus, has been interpreted as a symbol of his resurrection. Jonah images in later “early” Christian art, such as images found in the Roman catacombs, are the most common motif found on tombs as a symbol of Christian resurrection hope. In contrast, the story of Jonah is not depicted in any first century jewish art and iconographic images on ossuaries are extremely rare, given the prohibition within Judaism of making images of people or animals.

The tomb in question is dated prior to 70 CE, when ossuary use in Jerusalem ceased due to the Roman destruction of the city. Accordingly, if the markings are Christian as the scholars involved believe, the engravings represent — by several centuries — the earliest archaeological record of Christians ever found. The engravings were most likely made by some of Jesus’ earliest followers, within decades of his death. Together, the inscription and the Jonah image testify to early Christian faith in resurrection. The tomb record thus predates the writing of the gospels.

The implications of this discovery are extraordinary–that the earliest followers of Christ were already marking their graves with symbols of Christian hope through the resurrection even prior to the writing of the Gospels. This discovery directly contradicts claims by scoffers that the Gospels were a complete fabrication, a work of fiction.

It also provides objective, historical proof not only of the existence of Jesus, but also the believe in his resurrection. Jewish archeology “experts” have tried to discredit the significance of this discovery, but their explanations are unconvincing.

As the article points out, this discovery also casts serious doubt on the age-old misguided idea that the earliest followers of Christ were Jews. It is highly unlikely that a Jew–with all the controversy surrounding Christ and his followers–would overcome his inherited superstitions and be buried in a grave engraved with Christian iconography.

Much more likely, this is the grave of a non-jewish citizen of Judea–a non-jewish Judean-who comprised the majority of the population at the time.

For further information you can go here.