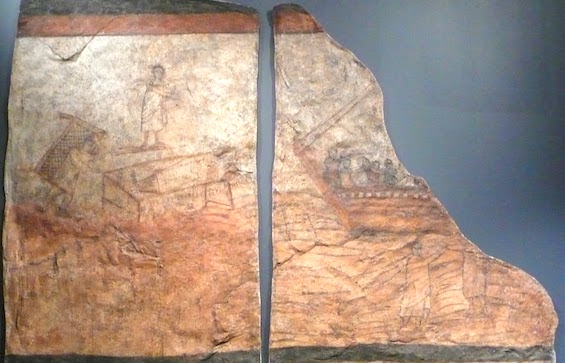 In 1920, British soldiers digging trenches near the Euphrates River in eastern Syria uncovered the remains of the ancient town of Dura Europos, which included what turned out to be the world’s oldest Christian church with wall murals that depicted iconic images of both the Old and New Testament:

One of the oldest known house churches was built in Dura Europos in Syria, the far eastern edge of the Roman empire. The house was constructed by the first third of the third century and was converted for use as a Christian church at some point between 240AD and 250AD. The space could hold fifty to sixty Christian worshipers.

The walls throughout this church were extensively painted, though unfortunately most of the images no longer survive. We do know that the wall paintings depicted images relating to original sin, the rite of baptism, and salvation themes particularly appropriate for an early Christian church that would have actively sought new converts. Although most of the murals do not survive today, we can get a good sense of how the paintings may have looked via the wall paintings in the nearby synagogue at Dura Europos, which was roughly contemporary with the church and may have been painted by some of the same artists.

Unlike later Roman wall painting, the religious paintings at Dura Europos do not create an illusionistic window into space, but rather depict figures and images flatly on the wall surface; the subjects are more symbolic and iconic than they are illusionistic. Scholars do not fully agree about why this more abstract approach to painting was employed at Dura Europos. Some suggest that this unique approach could be related to the early Christian reluctance to depict graven images. Others have suggested that it could be evidence that artists at the eastern side of the empire had more artistic affiliation with places like Persia than they did with the Roman Empire itself. In any case, the stylistic difference from the rest of Rome is noteworthy and bears consideration…

When Christianity emerged in the late antique world, Christian ceremony and worship was much more private even secretive than it would become in the later Medieval periods. Before Christianity was legalized in the fourth century, Christians suffered intermittent periods of persecution at the hands of the Romans. Therefore, Christian worship was purposefully kept as inconspicuous as possible. Rather than building prominent new structures for express religious use, Christians in the late antique world took advantage of preexisting, private structures: houses. Not only were houses unobtrusive, they were also devoid of the pagan associations of official Roman buildings, such as basilicas or temples. As Byzantine scholar Richard Krautheimer puts it: “Inconspicuousness was both prudent and ideologically desirable for Christianity, and could be best achieved behind the façade of domestic middle class architecture.”

The first “house churches” were private homes that were converted into Christian churches (or meeting houses) after the fact. These churches were known as domus ecclesiae, Greek for “house” and “assembly.” Since these domus ecclesiae emerged in third century Rome, they are closely tied to domestic Roman architecture of this period, specifically to the peristyle house, in which the rooms were arranged around a central courtyard. These house churches had a central courtyard surrounded on three sides by a number of rooms. These rooms were often adjoined to create a larger gathering space that could accommodate small crowds of around fifty people. Other rooms were used for different religious and ceremonial purposes, including education, the celebration of the Eucharist (the ritualistic consecration and consumption of bread and wine in Christ’s memory), the baptism of Christian converts, storage of charitable items, and private prayer and mass.

In the early Christian church, newly inducted Christians were only permitted to partake in certain portions of Church ceremonies. For the remainder of their worship time, they were required to listen from a separate room. This necessitated the building of rooms situated directly outside but audibly proximal to the main worship rooms. As a result, the Roman peristyle home was extensively remodeled when it was converted into a Christian church.

When Christianity was legalized in the fourth century, Christians were no longer forced to use preexisting homes for their churches and meeting houses. Instead, they began to build churches of their own. Even then, Christian churches often purposefully featured unassuming even plain exteriors, but they tended to be much larger, as the rise in the popularity of the Christian faith meant that churches needed to accommodate an increasing volume of people.

Scoffers and skeptics claim that there is absolutely no reliable evidence for Christianity prior to Constantine or the later Roman Catholic Church — both of whom allegedly conspired to fabricate this new religion out of thin air based on common pagan myths.  And to prove their allegations, they point to the lack of archeological evidence prior to age of Constantine.  However, as this article explains, there was a logical reason why the archeological evidence is scant in the first three centuries AD — Christians were often persecuted, and thus were forced to meet and pray together often in private homes, such as this one in Dura Europos.

When confronted with the murals from this early church, the same scoffers claim there’s no proof that the mural depicts Christ healing the paralytic — to the atheists, it is merely a picture of a man standing over another man lying in bed.  But the mural also clearly depicts Christ standing over Peter who has sunk into the water, and the woman at the well.  When taken together, there can be no doubt that this mural is a genuine Christian artifact, and that those who recognize it as Christian are not guilty of “confirmation bias,” that they merely want to see it as such.

It is those who refuse to see Dura Europos for what it is who are the ones with the “confirmation bias” — toward atheism.