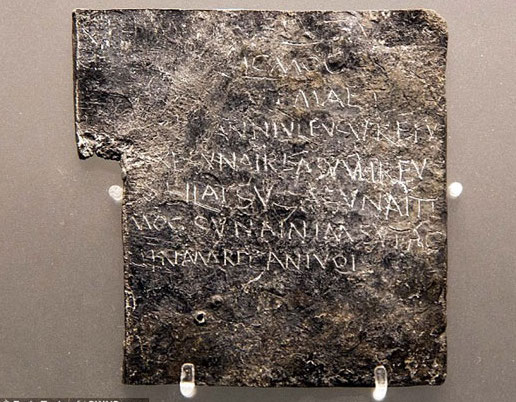 In 1979, during an excavation of the Roman-era “Sacred Spring” of the King’s Bath in Bath, England, 130 Roman curse tablets were found, one of which contained the earliest known reference to Christianity in England:

A collection of 130 ancient ‘curse tablets’ featuring gruesome messages of revenge has been added to the World Heritage register.

They include wishes that thieves should go blind and mad, while cheaters become as ‘liquid as water.’

The nasty messages – known as curse tablets – were written on pieces of lead by victims of theft or wrong doing, and were tossed into the hallowed spring waters in Bath, Somerset.

Now 130 of the artefacts unearthed at the Roman Baths have been deemed so precious they have been added to the United Nations Educational, Scientific and Cultural Organisation (Unesco) ‘Memory of the World’ register of outstanding documentary heritage.

In what could be the Roman version of modern-day trolling, the authors poured bile on their enemies and called for revenge in the most gruesome ways.

One tablet asks for an adversary’s intestines to be ‘quite eaten away’, while another one reveals that the victim of a theft of a bronze vessel wanted the cup to be filled with the thief’s blood.

One of the tablets is written in British Celtic – the only text known to survive in that language – while another tablet contains the earliest known use of the word Christian in Britain.

The curses, which date back between the 2nd and 4th century AD, are mostly written in Latin on pieces of lead and pewter and are addressed to the goddess Sulis Minerva.

They were cast into the hot springs at Bath, where they were left for the goddess, who was worshiped by Celts and Romans and believed to dispense justice…

One person asked that a thief who had stolen their gloves should go ‘mad and blind’, saying: ‘Docimedis has lost two gloves and asks that the thief responsible should lose their minds and eyes in the goddess’ temple.’

While another person wrote: ‘May he who carried off Vilbia from me become liquid as the water. May he who so obscenely devoured her become dumb’.

There was also a tendency for particularly gory punishments for the guilty, including a curse about a stolen ring.

The aggrieved victim said: ‘…so long as someone, whether slave or free, keeps silent or knows anything about it, he may be accursed in (his) blood, and eyes and every limb and even have all (his) intestines quite eaten away if he has stolen the ring or been privy (to the theft).’

[One tablet has the earliest known reference to Christianity found in England, which reads, “”Whether pagan or Christian, whether man or woman, whether boy or girl, whether slave or free whoever has stolen from me, Annianus [son of] Matutina (?), six silver coins from my purse, you, Lady Goddess, are to exact [them] from him. If through some deceit he has given me…and do not give thus to him but reckon as (?) the blood of him who has invoked his upon me.”]

Given the age of these tablets, it is remarkable to find such an early reference to Christianity in England in around only the 3rd Century A.D.  And that the reference was made by a non-Christian makes it even more remarkable.

Clearly, this tablet was written by a pagan Roman who was aware that there were already Christians in England at this very early date, and Christians must have been common enough that such a reference would not have been obscure as there were probably Christians among the Roman occupiers and the local Brits themselves.  That the Roman who wrote this tablet included Christians among the possible thieves who stole from him suggests that being a Christian at the time didn’t remove one from suspicion of wrong-doings.

That said, it’s hard nor to notice that this reference to Christianity in the tablet seems to echo Paul’s Epistle to the Galatians in 3:26 – 28:

This similarity would suggest that when Paul wrote this Epistle, he was using a well-known trope that would have been very familiar to both Greeks and Romans to convey his ideas to them in a way that was familiar to them.   And that a  Roman in England used the very same sentence construction in reference to Christianity, makes even more remarkable.