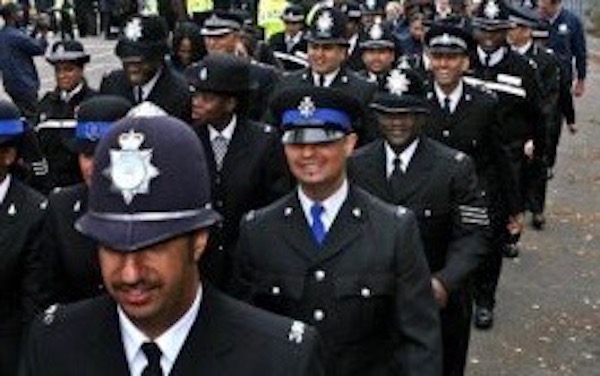 Police Commissioner of Thames Valley, Anthony Stansfeld, is investigating the regulations that caused police to investigate an elderly White woman who merely honked at another driver who happened to be Black:

A leading police commissioner has revealed that hate crime regulations forced his officers to question an elderly woman for beeping her horn at another car.

Anthony Stansfeld, the police commissioner for Thames Valley, has called for a review of current rules after the elderly lady was quizzed under caution because the driver just happened to be black.

Speaking about the case, he said that the woman is a ‘pillar of society’ in his community and was left devastated after she had to be investigated on suspicion of a hate crime because she honked at the other car for ‘taking ages’ at the petrol station…

Stansfeld revealed that, under current laws, detectives have to investigate anything that was ‘perceived’ to be a hate crime.

He added that this could lead to ‘huge injustices’.

He told the Times: ‘It was an absolute classic. An elderly couple turned up at a petrol station and there was a woman who had filled up with petrol in front of them.

‘She was taking ages fiddling around and the lady who was driving, who was in her seventies, peeped on the horn and out flew an Afro-Caribbean lady who screamed abuse at them, went into the kiosk and reported it as a hate crime.’

The police commissioner said that they were forced to investigate the elderly woman, who was ‘hugely upset’.

The woman even wrote to Stansfeld asking him if he had recorded the case as a crime.

The commissioner added: ‘She asked us to remove it but the law is such that once it’s on the books we cannot do so.’

As well as revealing the shocking incident, the commissioner lent his support to Sara Thornton, chairwoman of the National Police Chiefs’ Council.

Last week, Thornton called for a bigger focus on tackling burglaries and violent crimes rather than issues like misogyny and historical allegations against the dead.

Blacks and other non-Whites know exactly what they are doing when they call police over being offended by something that a White person has done, and they will use it to their advantage with impunity.  When they really start taking advantage of the law, the entire police force will have no time to do anything else but investigate how Blacks merely “perceived” a racial slight.  And because of “White privilege,” Whites will be oblivious to how their very existence is “offensive” to non-Whites, who are oppressed every day by having to live among Whites.

Diversity must be enforced at the end of the barrel of a gun, as no one would voluntarily accept it.  And this means that the entire police force must be enlisted to make sure that Whites get the message loud and clear.  The diversity monster must be fed a sacrificial White person on a regular basis to keep the public in line — and articles like this are a warning to all Whites in England, “You are being watched because you are already guilty.”