Elite ‘White-Passing’ Jews In U.K. To Be Formally Investigated For Racism Against Jews Of Color 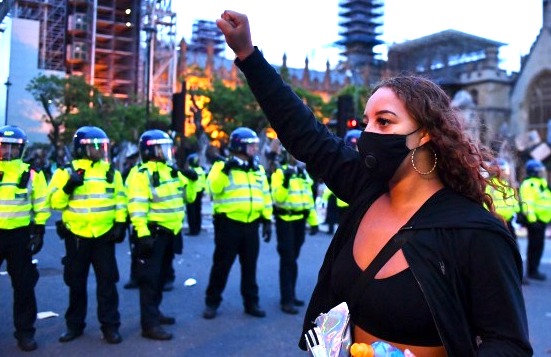 The Board of Deputies of British Jews, a Jewish supremacist advocacy group, announced the formation of a new commission to investigate and abolish racism among the ranks of the elite white-looking Jews in the U.K. toward Jews of color, specifically Black Jews:

In the wake of the demonstrations against police brutality and racism in the US, the Board of Deputies said, “Over the last week, we have heard from a range of Black British Jews that our own communal spaces are not always welcoming.”

“We have heard complaints about being stared at in synagogues, being asked probing questions, being given a hard time by security at communal buildings, facing racism in Jewish schools, a lack of racial diversity in Jewish leadership positions, and even heartbreaking prejudice in the context of seeking another Jewish partner,” it noted.

In a statement published on Monday, the Board of Deputies announced it was establishing a Commission on Racial Inclusivity in the Jewish Community in order to “banish prejudice and promote inclusion.”

The new commission will take testimony from Jews of color on their experiences, discuss steps to be taken with community institutions, issue a report and recommendations and then review compliance with the recommendations.

Board of Deputies President Marie van der Zyl said, “We have all been sickened by the killing of George Floyd and the sheer scale of violence and prejudice that Black people face on both sides of the Atlantic. While we as a community must show solidarity and seek to change our whole society, there are things we still need to fix in our own community.”

“The Commission on Racial Inclusivity in the Jewish Community will seek to listen to Black British Jews to understand the prejudice and barriers that exist in our own community and work with all our partner institutions to make sure that there is zero tolerance in our community for racism of any kind,” she added.

The commission’s chair, Stephen Bush, said, “Together with Black British Jews from across the community, we will be able to explore the issues at the heart of the Black-Jewish experience.”

To ask a supremacist organization like the Board of Deputies of British Jews to essentially investigate itself and the Jewish ‘white-passing’ elite who are the de facto rulers of the U.K. for ‘racism’ is pure theater.

These ‘white’ Jews have inter-married into the old British aristocracy and essentially replaced it — and they aren’t about to give up their ‘white privilege’ and control just to make the Jews who cannot yet pass as ‘white’ feel better.

The original British aristocracy went broke trying to maintain their spendthrift lifestyles, and instead of tightening their belts, they overcame their ‘racism’ toward Jews and decided they were suddenly ‘White enough’ for their sons and daughters to marry — and bail them out financially.

And by doing so, they created a new ‘British’ aristocracy of racial hybrids who now rule the U.K. as if it were their own Bolshevik gulag.

As we’ve previously reported, among Jews there is an obvious and firmly-entrenched racial caste system, with the ‘whitest-looking’ Jews — like the Rothschilds and their minions — at the top of the racial pyramid.

And now ‘Jews of color’ are starting to realize just how powerful their ‘fellow Jews’ are — and they want a piece of their ‘privilege’.

But an essential aspect of Jewish power has been their ability to ‘pass’ as White when it’s to their advantage, and they are not about to acknowledge that and renounce it to make a small minority of ‘colored’ Jews not feel excluded.