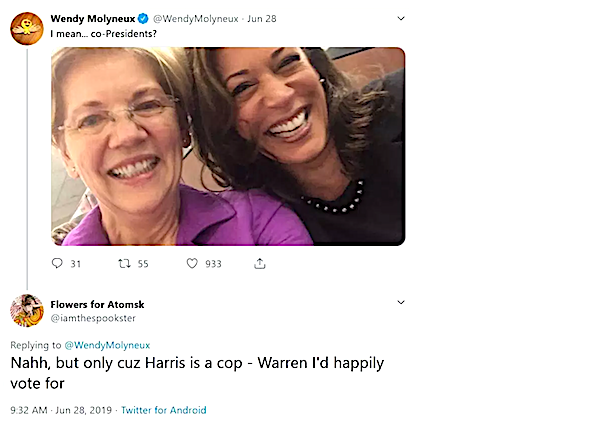 Police in Dayton, Ohio, have yet to determine what motivated a White radical communist — a supporter of Antifa and Elizabeth Warren’s presidential campaign — who also had a history of making violent threats of rape against teenage girls — to open fire at a bar frequented by a largely Black clientele, killing nine and wounding 27:

Connor Betts was named by police as the body armor-wearing, masked gunman who fatally shot at least 9 people, including his own sister, a tragedy that left at least 27 more injured, in a popular bar and restaurant district in Dayton, Ohio…

On social media, the suspect’s biography started to emerge. On his Twitter page, reviewed by Heavy, he described himself as “he/him / anime fan / metalhead / leftist / i’m going to hell and i’m not coming back.” He wrote on Twitter that he would happily vote for Democrat Elizabeth Warren, praised Satan, was upset about the 2016 presidential election results, and added, “I want socialism, and i’ll not wait for the idiots to finally come round to understanding.” The Greene County Board of Elections lists his party as “Dem.”

…Scanner audio – and multiple Twitter reports – indicated the shooting was focused around Ned Peppers. The Ned Peppers’ website describes it as a “traditional western-ish themed bar located right in the heart of the Oregon District in Dayton Ohio.”

…Police Chief Richard Biehl said at an August 4 press conference, “We are very, very early into this investigation. Any suggestion at this time of motive would be irresponsible. We do not have sufficient information to answer the question that everyone wants to know, ‘why?’ We do not have that answer at this time…

Biehl added, “We have not evidence to suggest that there’s a bias motive in this crime at this time.”

…Betts was in the Junior ROTC program in high school, and the newspaper also reported that he was a lead in “A Midsummer Night’s Dream.” However, there was a dark side. A classmate told the Daily News that Betts had “fantasized about tying her up and slitting her throat” and he told her he was scared he had those thoughts. She said she was included on a hit list, but her concerns weren’t taken seriously when she reported them.

Former high school classmates described him as a misogynistic bully. “I went to high school with the shooter. He made a hit list of fellow students and was arrested. Somehow he was still able to legally purchase a gun, which he used to kill at least 9 people. Something needs to be done,” wrote one…

His parents’ Facebook accounts are active. Their names are Moira and Steve Betts. On Facebook, his mom posted pictures of pumpkins, family, Christmas ornaments, Christian religious statues and a graphic that declared “stop the alt right.” She labeled a photo of Betts and his sister Megan, “My loves.” His dad wrote on Facebook that he was a technical lead for a technologies corporation. Betts’ father posted about net neutrality and funny parody videos. He also shared a video that criticized the rhetoric of President Donald Trump.

…In high school, Betts may have been suspended for drawing up a hit list on the bathroom wall, according to WCPO-TV. Chris Baker, the former principal, told the Journal-News, “I would not dispute that information, but I don’t want to get involved any more than just making that comment.” Bellbrook police said they are treating the Betts’ family as victims.

Dayton 24/7 Now spoke to classmates of Betts who alleged that “Betts was supposed to write a letter of apology to the people on the list. After being expelled, Betts was allowed back to school.” The site reported that Betts was not described as a loner. This site says the school incident occurred when people “found a notebook where he reportedly wrote a list of people who he wanted to rape, kill and skin their bodies.”

…Connor Betts’ Twitter page is very different; he indicates he’s a “leftist” and rails against QAnon, ICE, the industrial revolution, and police.

The page handle? I am the spookster. On one selfie, he included the hashtags, “#selfie4satan #HailSatan @SatanTweeting.” On the date of Republican Sen. John McCain’s death, he wrote, “F*ck John McCain.”

This shooting will be quickly swept under the rug by the mainstream national media because it does not, like many shootings, fit into the cartoonish anti-White, anti-Right Wing agenda they are tirelessly promoting.

Here we have a White shooter who kills several Blacks in a mass shooting, yet the police are quick to point out that they do not believe he was motivated by “hate”.

According to a comment left on the website of Ned Peppers Bar where the shooting took place, when Blacks started frequenting the bar in large numbers, many Whites predictably stopped going.

Betts seems to have come from a nominally Christian family of political leftists yet was a self-avowed satanist who advocated violence as a means of bringing about some sort of socialist revolution in America — the typical modus operandi of socialists historically.

And like many hardcore Leftists, Betts hated the police and all forms of law enforcement — including ICE — which suggests that he supported the rights of illegal aliens to flood America as a means of bringing about his socialist utopia.

His motive is clear — violent socialist revolution, which the Jewish-dominated mainstream media is complicit in bringing about.

Betts is their creation — their “golem” — who does their dirty work. 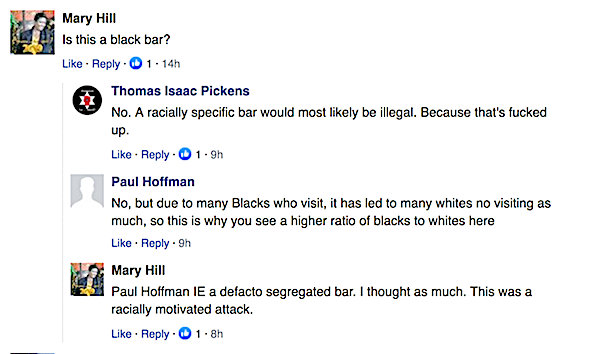