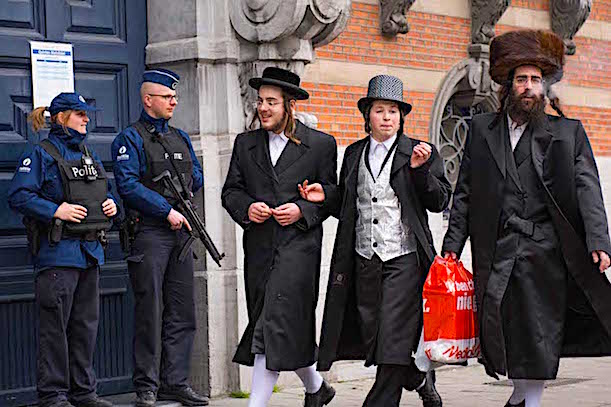 According to Karoline Edtstadler, the new head of the working group on anti-Semitism in the European Parliament, the European Union needs to do much more to protect its Jewish community, including stationing police wherever Jews congregate:

“In front of every synagogue, every Jewish school — anywhere where Jewish life takes place — there should at least be the awareness of the police, and depending on the risk assessment there also has to be the presence of the police [so that it] can act if there’s an attack,” Karoline Edtstadler said.

“Unfortunately, there is a pressing need for this. We can argue about whether police presence in front of synagogues is good or bad, but it’s clearly a necessity,” she added.

In a wide-ranging interview with The Times of Israel, Edtstadler, a former deputy interior minister in Austria who entered the European Parliament earlier this summer, also said Brussels should support Israel as the only democracy in the Middle East and not assume the role of a greater “moral authority” that can force its views and positions on Jerusalem, especially regarding the conflict with the Palestinians.

“There are three kinds of anti-Semitism: the old-fashioned kind, a new imported one, and anti-Zionism. It took a long time before people dared speaking about the imported anti-Semitism, but it’s a fact,” Edtstadler said, alluding to Jew-hatred among immigrant communities….

“In Austria there is really good cooperation between the police and the Jewish community. There is police in front of all relevant institutions, such as synagogues and schools, and whenever there is a relevant risk assessment… I was shocked, honestly, to hear that this was not the case in Germany,” she said.

Edtstadler added that she was greatly concerned by what she termed a lack of awareness about anti-Semitism in Europe, vowing to address the issue in the parliamentary working group she heads since June.

“There’s a problem with security, and one thing our working group wants to do is organize a big conference to remind member states to take care of securing the Jewish communities,” she said.

So the Jews aid and abet the flooding of White European countries with violent, antisemitic Muslims, and then they turn around and scream ‘antisemitism’ when their “imported” Muslim antisemites target them.  And they expect the White European taxpayers to pay for personal armed security guards to protect them.

And then they have the chutzpah to claim they have no idea why there is this “uptick” of antisemitism in Europe, even though high-level Freemasons have admitted that Israel’s genocidal policies toward the Palestinians are a major cause of Muslim hostility toward Jews in Europe.

When you are this flagrantly hypocritical, no wonder you need armed police protection around the clock.