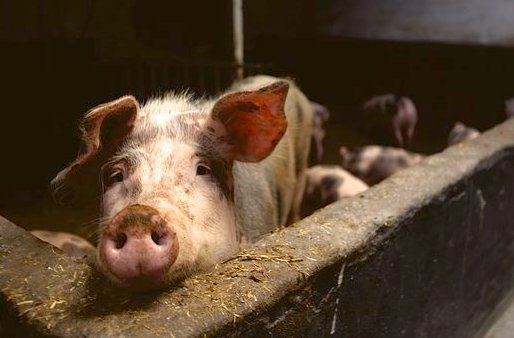 Some of the countries in the pro-migrant, open borders EU are contemplating building fences to protect pig farms that are being threatened by wild boars which are allegedly carrying African swine fever:

As African swine fever spreads, European countries are afraid of the damage that could be caused to their farming sectors.

The deadly disease – which causes internal bleeding and hemorrhages in pigs – is moving quickly through Eastern Europe, typically through wild boar, which travel long distances and can infect domestic pigs being bred on commercial farms.

In response, countries like Germany, the EU’s largest pork producer, are stepping up efforts to protect their pig populations, some going so far as to consider building border walls to keep boars out.

At the same time Denmark has approved plans for a fence along its border with Germany to stop wild boar movements between the countries as a precaution.

So far outbreaks of African swine fever have been confirmed in nine EU countries, affecting Estonia, Poland, Latvia, Lithuania and Romania the worst.

Outbreaks have also been confirmed in Russia, Ukraine and Moldova.

The virus first entered Eurasia in 2007 in Georgia via wild boar imported from Africa.

The first outbreak in Georgia in 2007 was a full disaster. It fully destroyed pork production and led to a broad contamination.

After Georgia, the virus spread to Russia, Moldova and Belarus and, in 2014, entered the European Union via Poland and the Baltic states.

At the EU level, Brussels has allocated €1.2 million to member countries to prevent the spread of swine fever.

The EU also issued a research grant in 2018 for the development of an African swine fever vaccine in its Horizon 2020 program, the biggest EU research and innovation program.

And just how did African swine fever infect the European boar population?  Perhaps instead of protecting pig farms the EU should be doing a better job protecting their White populations by announcing a complete moratorium on all immigration from Africa and the Middle East?  And why stop there?  Announce that all Africans and Arabs will be repatriated back to their home countries “until” this outbreak is contained.

With this migration crisis, Third World flotsam and jetsam have brought some exotic diseases with them that have before now never been seen in Europe.  These diseases threaten both people, wildlife, and livestock.  Merely building fences to protect pig farms will do nothing to address the underlying cause, but each EU country should reassert control over their national borders, not just to keep pigs out, but also keep out the migrants who are far more threatening as an “invasive species.”