Evangelical Pastor Claims U.S. Will Be ‘Minimally Affected’ By COVID Because Of Trump’s Support For Israel 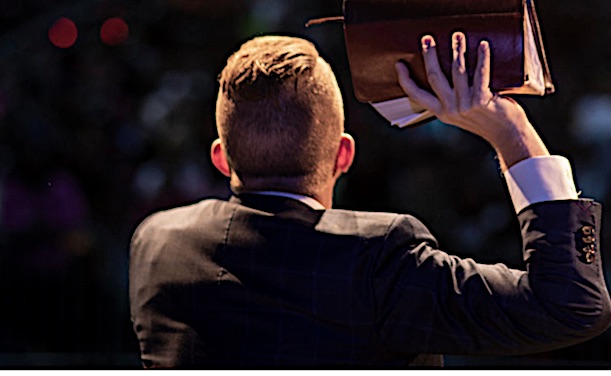 Zionist evangelical pastor Jonathan Shuttlesworth predicted during a recent livestream that ‘America will be minimally affected’ by the global coronavirus outbreak because of President Donald Trump’s support for the state of Israel:

“If it’s a plan from the deep state to practice shutting America down [for] population control, it will fail,” Shuttlesworth said. “The Lord looks at the plans of the wicked and laughs, and men can’t override God’s blessing.”

“If God is for you, who can be against you?” he asked. “Read the Bible. A nation doesn’t have to be run by a perfect man for God to give goodness to a nation. ‘I will bless those who bless you, and I will curse those who curse you.’ Even Trump’s critics would have to say that he honors Israel. Now they can say, ‘He just does it to appeal to the Christian [base].’”

“They can say whatever they want, he honored Israel. Obama honored the enemies of Israel; Trump honors Israel, and it’s a massive difference. And because of that, I predict America will be minimally affected by coronavirus,” Shuttlesworth continued.

Shuttlesworth then added “a little caveat” to his prediction to claim that if America is affected by the virus, it will impact liberal states that “have chosen to give God the middle finger.”

“I exclude from my prediction the Pacific Northwest, California, and New York, because in a God-honoring nation, those are four places that have chosen to give God the middle finger in the shape of an Empire State Building lit up in pink to celebrate the passage of the [legislation] that you can kill a baby,” he said. “So if it did hit Washington state hard, with that government there, Oregon, with that government, California. Let me tell you: your government matters. If it hits New York, you will not see me surprised.”

It is remarkable how these juedo-Christian pastors can claim with a straight face that Numbers 24:9 refers to the modern state of Israel that was founded barely 70 years ago by a bunch of communist Khazars pretending to be legitimate descendants of the ancient Israelites:

Numbers 24:9 refers to the Israelite people, the 12 tribes who came out of the loins of Jacob/Israel.  In no way can it have ever referred to a physical geographical entity — a modern nation-state — that wouldn’t exist for another 2,500 years.

And no way can it refer to the people today who call themselves “Jews”.  Even the jewish scholar Shlomo Sand freely admits that the Israelite identity of today’s ‘Jews’ is a complete fabrication, a falsification of history.

Christ came to gather those lost tribes of Israel (Matt 15:24), and it doesn’t take a rocket scientist to figure out who the true descendants of those ‘lost tribes’ are today.