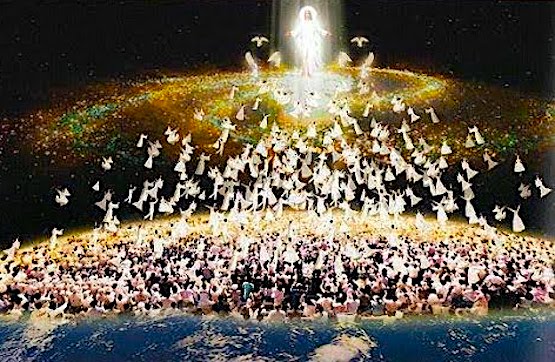 Christian evangelicals have begun airing a new Hebrew-television channel in Israel in hopes of converting Jews to Christianity in anticipation of The Rapture™, a Disney-like fantasy where certain lucky believers get levitated up into heaven as a reward for their unconditional support of Jews and the state of Israel:

GOD TV has signed a seven-year contract with Israeli cable-television company HOT, giving it the ability to preach gospel to more than 700,000 Israeli households, causing an uproar in Israel, with many calling for the terms of the deal to be investigated and for the channel to be taken off the air.

While this is not the first attempt or even the first Christian evangelical station that is broadcast on cable TV in Israel—Daystar and Middle East TV both broadcast in Israel—it represents the first missionizing program in Hebrew on cable TV. The Cable and Satellite Broadcasting Council said it was conducting an investigation to determine whether “Shelanu” had violated the terms of its license, which prohibits any programming that wields “undue influence” on viewers. This would include proselytizing.

Avi Bell, a member of the Faculty of Law at Bar-Ilan University in Ramat Gan and the University of San Diego School of Law, as well as a senior fellow at the Kohelet Policy Forum, told JNS that while it is legal to missionize in Israel, “it is not legal to offer material benefits in order to induce someone to convert.”

…So while it’s legal to missionize in Israel (though not to minors), it is possible that GOD TV is violating the terms of its broadcasting license.

Communications Minister Dudi Amsalem was approached about this issue and he said he would “not allow any missionary channel to operate in the State of Israel at any time and in any situation.”

…In a video message announcing the launch on his organization’s website, GOD TV CEO Ward Simpson said, “GOD TV has been given government permission to broadcast the gospel of Jesus Christ—Yeshua the Messiah—in Israel on cable TV in the Hebrew language. Never before, as far as we know in the history of the world, has this ever been done.”

One of the main beliefs of Christian thought for centuries has been the concept of “Replacement Theology” or “Supersessionism,” which says that God’s blessing to Abraham was transferred from the Jews to the Christians. Adherents of replacement theology believe that the Jews are no longer God’s chosen people, and that God has now chosen the church.

The other belief held by Christians is that the Jews are responsible for the death of Jesus. It is this belief that tragically led to so many pogroms and Jewish deaths over the centuries…

“The Jewish historical experience for centuries has been rivers of blood after Christians attacked Jewish communities,” he pointed out. “Anyone with Jewish historical awareness will take umbrage at this attempt to preach to Israelis.”

Israelis tolerate evangelical “Christians” for two selfish reasons: they are a cash cow that pours billions — yes, billions — of dollars into Israel, and they blindly and zealously support the state of Israel through powerful Zionist lobbies, like AIPAC and CUFI.

But behind their backs, these same evangelicals are despised — Bibi Netanyahu has been quoted as stating, “My opinion of Christian Zionists? They’re scum, but don’t tell them that. We need all the useful idiots we can get right now.”

And evangelicals are wasting their time trying to convert the  Jews in Israel or anywhere in the “diaspora” — they are not the Israelites in the Bible — but rather imposters who have taken on that identity so that Christians give them a free pass as “God’s chosen” not matter how egregious their behavior.

They are the false accusers whom evangelicals have been duped into loving as if they were true Israel.

This deception is the foundation of Jewish power in the world today.

These unwitting Christians are literally worshiping Satan and financing the rebuilding of his Baal Temple in Jerusalem.

The Rapture will not be televised.