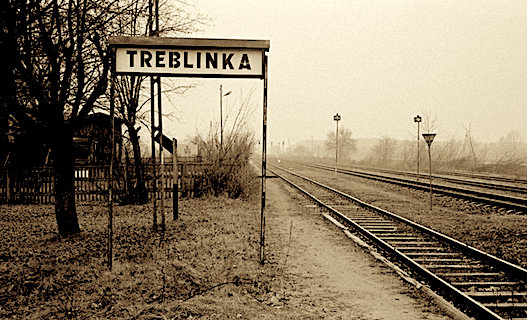 Feeling pressure to locate the 6 million Jews who completely disappeared without a trace after allegedly being ‘genocided’ during World War II, investigators of the Polish Institute of National Remembrance (IPN) announced that a new ‘mass grave’ was discovered on the site of the Treblinka I labor camp in central Poland:

An investigation of the grounds of Treblinka I revealed the mass grave under the site of the present parking lot, at a depth of only 10-15 centimeters underground.

Bones of victims, clothing remnants and bullets shells from pistols and machine guns which the Nazis used to kill the victims were found in the grave.

An international forensic team assisted the IPN, including experts from the UK, Norway and Austria, in the first thorough investigation of the Treblinka grounds.

Prosecutor Andrzej Pozorski from the Commission for the Prosecution of Crimes against the Polish Nation said: “Our work has revealed a grave of 4.5 by 3.4 meters containing human remains in an area currently used as a car park in the forest, adjacent to the site of the Treblinka I camp.”

“At this stage, our aim is to precisely determine how many graves there are, and how big they are,” Porzorski said. Pozorski added that at this point only bones were seen and no full skeletons were found.

The investigation, which began on November 12, is part of a criminal investigation by the Commission for the Prosecution of Crimes against Poland based in Szczecin into crime against the prisoners of Treblinka I.

“The research is completely professional,” said Professor Andrzej Ossowski, the head of the international forensic team. “We want to know the truth about Treblinka I, since society is more aware of the Treblinka II camp. However, in the former, Polish prisoners constituted the vast majority of victims.”

Treblinka I was a forced labor camp for Polish citizens. About 20,000 people were forced to work there between 1941 – 1944. Only about 10,000 survived the inhumane conditions – the rest died from starvation and illness or were executed.

In 1999, ground radar tests were done at Treblinka by Richard Krege, and no graves, let alone ‘mass graves’ were ever found, which is remarkable considering 2 million Jews were allegedly “gassed”, buried in mass graves, then inexplicably exhumed and cremated, then the bone debris was crushed by hand with hammers, then reburied.  Let that sink in for a moment.

Imagine making a city the size of San Francisco disappear without a trace into this small parcel of land the size of a few football fields.  It is simply impossible, and quite frankly an insult even to the intelligence of a four year old child.

Many Jews are waking up and speaking out about these obvious holes in the official narrative of the so-called Holocaust.

Clearly, this new “mass grave” is nothing more sinister than a garbage pit with some random debris from the camp that was plowed under to clear the site and make room for the parking lot.

To see the best documentary on Treblinka ever made that reveals the logistical impossibility of the alleged “mass killing” of 2 million Jews, watch and share “One Third Of The Holocaust“.