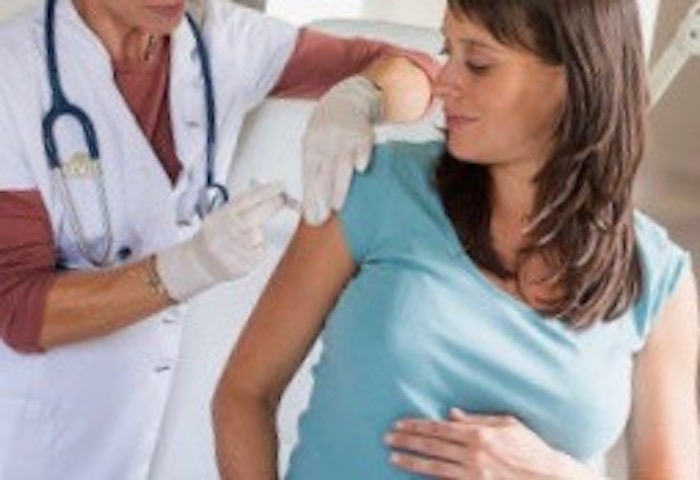 A study funded by the Centers for Disease Control found that a significant number of pregnant women had miscarriages after receiving a seasonal flu shot:

It’s far too soon to say the vaccine actually did cause miscarriages, and they say the study, paid for by the Centers for Disease Control and Prevention, did not find anything definite. Only 17 women had miscarriages that might be linked with vaccination. But it’s a troubling signal that they are following up on.

In the meantime, pregnant women are still urged to get flu vaccines because they and their unborn babies are at high risk from actually getting flu — and that’s something that’s been confirmed by many studies over a long time in tens of thousands of women.

“This study does not and cannot establish a causal relationship between repeated influenza vaccination and (miscarriage) but further research is warranted,” James Donahue and Edward Belongia of the Marshfield Clinic Research Institute in Wisconsin and colleagues reported in the journal Vaccine.

An earlier, similar study done by the same team found no evidence linking vaccines with miscarriage.

“We don’t want people to panic over this headline. Get your flu shot. It’s safe,” said Dr. Laura Riley, an obstetrician at Massachusetts General Hospital and Harvard Medical School.

It’s a tricky issue because of the renewed and increasingly vocal anti-vaccine movement. Support is still small for such groups, which allege the government and researchers, along with many journalists, are colluding to cover up what they say are the dangers of vaccines. Public health experts fear such groups will seize on a small study such as this one as proof vaccines are dangerous.

Dr. Amanda Cohn, senior adviser for vaccines at the CDC, said the open publication of the study shows there’s no cover-up and proves that public health agencies are watching out for vaccine safety.

“Really, this study highlights how strong our vaccine safety surveillance is,” Cohn said. “This is exactly the type of signal that we see because we do such a diligent job focusing on flu vaccine safety. Clearly, we need to study this more.”

This is only one of many studies that has shown flu shots to be abortificants, but the CDC continues to pretend that the findings are still “inconclusive”.  That the CDC is still recommending flu shots to pregnant women — knowing that there’s even the possibility that they induce abortions — is completely unconscionable.  If they truly cared about the health of women and children, the CDC would stop recommending flu shots to pregnant women until they came up with conclusive evidence one way or the other.  But they will never do that because they know which way the evidence will compel them to go.

If this study found 17 examples of women who miscarried after having flu shots, there must be thousands of unwitting women who have lost their unborn children to “inexplicable” miscarriages.  The drug companies themselves know full well that flu shots still contain mercury, which is a known abortificant, and yet they do nothing to remove the mercury because there’s no conclusive “proof” that it isn’t “safe”.

No wonder Congress had to pass a law making it impossible to sue vaccine manufacturers.