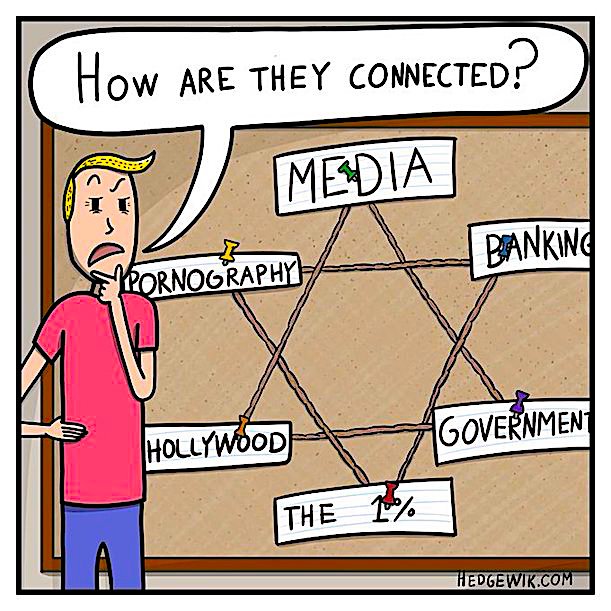 Jews are crying foul once again after a meme, which illustrates how inter-connected jewish power controls America, wasn’t removed by jewish-controlled Facebook for violating its community standards:

The meme, uploaded on December 15 to the Facebook page Liberty Memes 777, depicts signs thumbtacked to a board reading “Media,” “Pornography,” “Hollywood,” “The 1%,” “Government” and “Banking,” with a line of cloth connecting each sign, forming the shape of a Star of David, while a man looks at it suspiciously and asks “How are they all connected?”

The comments on the article mostly consisted of memes, ranging from images of a dog defecating dislikes to a GIF of Sheldon Cooper from the TV series The Big Bang Theory saying “It’s funny because it’s true.”

A Twitter user named Jon B. reported the meme, but was told by Facebook in a reply that their moderators determined that it didn’t violate their Community Standards and wasn’t considered hate speech.

“So nice to see that Facebook tolerates #AntiSemitic postings as ‘not against community standards,'” he tweeted.

The creator behind the meme, identified as Hedgewik, uploaded it to his website on December 10.

“This is disgusting and you should be ashamed you anti-Semite,” said one comment.

Liberty Memes 777 is a page dedicated to posting memes, and includes such memes as calling Osama bin Laden’s niece a “Solid 9/11” and memes making fun of the UPS truck shootout in Florida.

The perception of an antisemitic ‘threat’ or boogeyman is essential to jewish identity, and perhaps the Jews who run the censorship cabal at Facebook understand this conundrum.

They will curb the most egregious ‘antisemitism’ but let the more benign examples, like this meme, slide through just to keep that small ember of antisemitism glowing.

Jews get excited when they discover new examples of antisemitism in the exact same way Blacks truly love it when White people make racist comments.  Besides their childish addiction to confirmation bias, both groups live with the fear that eventually their host White nations will tire of their shame games and take some serious and unpleasant counter measures.

But let’s face it: on one level this meme is somewhat flattering to Jews, as it reinforces that flattering ‘canard’ that Jews have indeed amassed an inordinate and disproportionate amount of power and wealth in America.

They love the power and wealth but hate and reject the responsibility that comes with it.