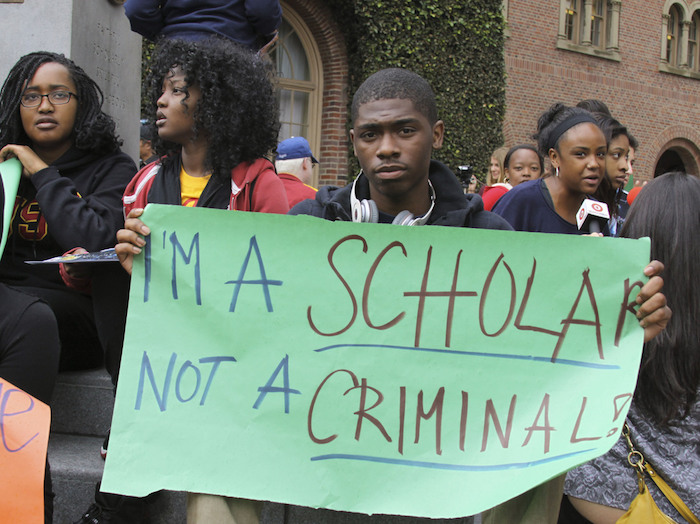 The New York City Police Department used a “controversial” IBM facial recognition software program that had a “racist” option which allowed it to detect the skin tone of a suspect:

Documents obtained by The Intercept show the NYPD and IBM engaged in a long-running facial recognition tech partnership from 2008 to 2016. While some of this deployment was discussed publicly, details about the extent of the program — as well as it’s more problematic elements — haven’t been.

As the article’s title informs the reader, camera footage could be scanned for face matches using skin tone as a search constraint. Considering this was pushed by IBM as a tool to prevent the next 9/11, it’s easy to see why the NYPD — given its history of surveilling Muslim New Yorkers — might be willing to utilize a tool like this to pare down lists of suspects to just the people it suspected all along (Muslims).

There are a number of surprises contained in the long, detailed article, but the first thing that jumps out is IBM’s efforts and statements, rather than the NYPD’s. We all know the government capitalizes on tragedies to expand its power, but here we see a private corporation appealing to this base nature to make a sale.

In New York, the terrorist threat “was an easy selling point,” recalled Jonathan Connell, an IBM researcher who worked on the initial NYPD video analytics installation. “You say, ‘Look what the terrorists did before, they could come back, so you give us some money and we’ll put a camera there.”

From this pitch sprung an 8-year program — deployed in secrecy by the NYPD to gather as much footage as possible of New Yorkers for dual purposes: its own law enforcement needs and to serve as a testing ground for IBM’s new facial recognition tech. Needless to say, New Yorkers were never made aware of their lab rat status in IBM’s software development process.

Even though the software could search by skin tone (as well as by “head color,” age, gender, and facial hair), the NYPD claims it never used that feature in a live environment, despite IBM’s urging.

According to the NYPD, counterterrorism personnel accessed IBM’s bodily search feature capabilities only for evaluation purposes, and they were accessible only to a handful of counterterrorism personnel. “While tools that featured either racial or skin tone search capabilities were offered to the NYPD, they were explicitly declined by the NYPD,” Donald, the NYPD spokesperson, said. “Where such tools came with a test version of the product, the testers were instructed only to test other features (clothing, eyeglasses, etc.), but not to test or use the skin tone feature. That is not because there would have been anything illegal or even improper about testing or using these tools to search in the area of a crime for an image of a suspect that matched a description given by a victim or a witness. It was specifically to avoid even the suggestion or appearance of any kind of technological racial profiling.”

It’s easy to disbelieve this statement by the NYPD, given its long history of racial profiling, but it may be those handling the secret program deployment actually understood no program remains secret forever and sought to head off complaints and lawsuits by discouraging use of a controversial search feature. It also may be the NYPD was super-sensitive to these concerns following the partial dismantling of its stop-and-frisk program and the outing of its full-fledged, unconstitutional surveillance of local Muslims.

Every cop who has been on the beat for more than 24 hours knows that non-Whites are far more likely to be involved in criminal activities that Whites.  Are we honestly supposed to believe that Blacks on the Southside of Chicago are afraid of being robbed and killed by White people?  Are Blacks honestly afraid of walking alone in White neighborhoods?  This is exactly what we are supposed to believe.  And if you don’t believe it, chances are you’re a “racist”.