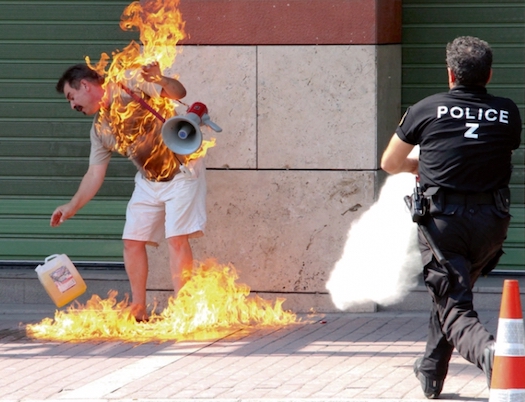 After having his application for asylum rejected by immigration authorities in the Netherlands, an unnamed Muslim man set himself on fire so as to avoid being deported back to his home country where he belongs:

A man set himself on fire in front of a bed-bath-and-bread shelter for asylum seekers on Helsinkistraat in Groningen on Thursday. The man, a failed asylum seeker, was rushed to hospital with burns, Dagblad van het Noorden reports.

The shelter, located in a former F1 hotel, is managed by the Inlia Foundation. It offers shelter to asylum seekers who have exhausted all legal remedies and have to prepare for their return to their home country, and asylum seekers awaiting a decision in their procedure.

The man who set himself on fire, lived in the shelter, Inlia director John van Tilborg sadi to the newspaper. “He is a disturbed guest of the hotel. It has also been known for some time that the man is disturbed.” Inlia was helping the man prepare for his return to his home country. What country that is, Van Tilborg would not say. “That is too private, but something like this is not easy.”

This strategy has been attempted by many Arabs and Blacks who will do anything to avoid returning to the hell holes they come from.  And if they are so badly injured in a fire that they can’t be transported home, then even better.  Spending years in a burn unit with multiple painful surgeries is still preferable than one more minute in the countries of their births.  And they want to convince us that all societies are equal.  The worst ghetto in a White country offers a better live for 99% of these invaders, which is why they are so desperate to stay and sponge off White taxpayers.

To suggest that this asylum seeker was somehow uniquely “disturbed” is rather disingenuous.  All Muslim invaders suffer from some level of mental illness — after all, what kind of person threatens to destroy the host country that takes them in and offers them free welfare benefits?  They call our White societies “systematically racist” but are willing to self-immolate in order to stay and suffer under that racism.  Perhaps our “racism” isn’t so bad after all.