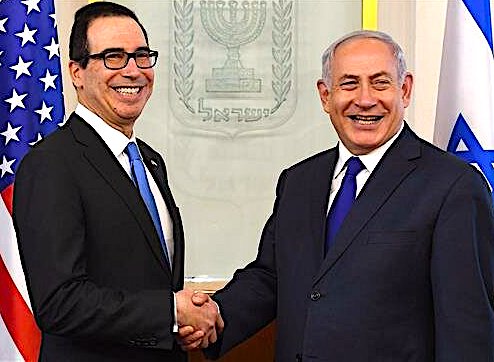 Israeli medtech and biotech companies are in line for an early ‘Christmas’ present, after U.S. Secretary of the Treasury Steven Mnuchin met with Israeli health officials and Marius Nacht, co-founder of life sciences and healthcare venture capital fund aMoon, to discuss the opening of a local branch of the U.S. Food and Drug Administration:

The meeting was held at the house of U.S. Ambassador to Israel David Friedman, and was attended by senior executives from Israeli health maintenance organization Clalit and Sheba Medical Center.

The FDA, a federal agency based in Washington, has very few branches outside of the U.S., and those are located in large countries like China, India, and several European and Latin American countries. No company looking to sell medical devices or formulations can operate in the U.S. without FDA approval, and it is an approval process that opens doors for companies globally.

At first glance, Israel is too small to meet the FDA criteria for a local branch, but the matter is being considered due to the country’s unusually large concentration of biotech and medtech companies, the person familiar with the matter said. While it will not replace the need to apply for FDA clearance in the U.S., it could shorten the application process for Israeli companies. Estimates are that such a branch could be established in Israel in the near future, the person said.

…Nacht started working towards a local FDA branch a year and a half ago, according to the person familiar with the matter. The idea is in alignment with the FDA’s strategy under recently resigned FDA commissioner Scott Gottlieb, who championed cutting bureaucratic red tape for new drug approvals and new regulations meant to cut down the ever-rising price of medication in the U.S.

Why is our jewish Secretary of the Treasury, Steve Mnuchin, involved in this insider deal and not Alex Azar, the Christian Secretary of H.H.S. which oversees the FDA?  And we’re sure it’s just another coincidence that the FDA commissioner, Scott Gottlieb, who works under Azar,  just so happens to be of the jewish persuasion.

Would it be antisemitic to ask if Scott Gottlieb holds dual U.S.-Israeli citizenship?

It’s even more suspicious considering that Israel’s largest drug company, Teva, was recently sued for billions of dollars after getting caught rigging generic drug prices for the U.S. market.  So the idea that this deal with the FDA is being done to save U.S. consumers money is outright laughable.

And note that the article makes clear that Israel does NOT qualify for a local FDA branch because it’s market is far too small, compared to giants like China and India.  How could Israeli companies under-cut Chinese and Indian pharmaceutical companies in price?  They can’t.  Pure and simple, this is being done to give Israelis another unfair advantage to further destroy competition in the U.S. drug market.