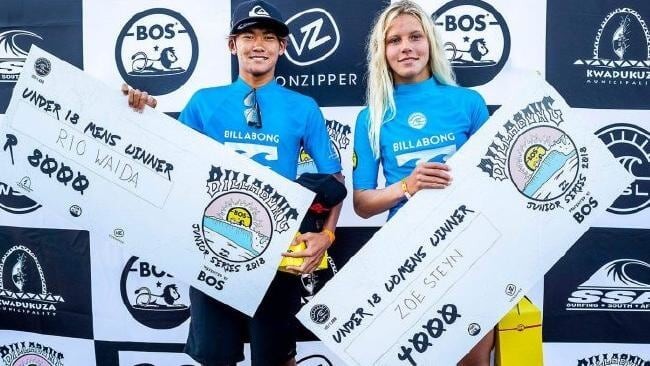 “Two junior surfers have found themselves at the centre of a furious debate over gender equality after a surfing competition’s organisers shared a seemingly innocent picture of them on social media.

The podium photo showing the smiling young competitors holding their winner’s cheques shows a big difference in their earnings.

Female champion of the Billabong Pro Junior series in Ballito, South Africa, Zoe Steyn won 4000 rand ($A400) over the weekend, while Rio Waida, the male winner, beat off the competition to earn himself 8000 rand ($A800).

However, WSL Australia/Oceania Regional Manager Will Hayden-Smith told TripleJ’s Hack there is more to the photo than meets the eye.

He claims the sum scrawled onto the winner’s cheques in surfing competitions is actually determined by how many surfers are in the male and female fields.

“Men get double the prize money only because there are double the competitors,” Will Hayden-Smith told ABC.”

No one, except a few feminists, is interested in watching women’s sports on television – or in person.

The television ratings for women’s sporting events – compared to men’s – proves this beyond doubt. The reason is simple: men are better athletes, and viewers want to watch the best at their sports perform. Women know this – that’s why they never have to compete against men – because they can’t. Knowing this, they still demand equal pay with self-righteous indignation.