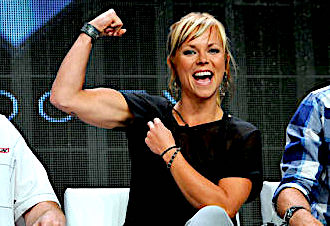 Yesterday, while attempting to beat her own land speed record, the 52,000 horsepower jet-powered car driven by racer, fabricator, and television personality Jessi Combs crashed in the Alvord Desert in Oregon, killing her, as local news reports:

Combs was 39 years old and held the title of “fastest woman on four wheels” after breaking 398 mph in that same North American Eagle Supersonic Speed Challenger in 2013.

Combs was attempting to beat her previous record, and had attempted it as recently as last year, when she managed a 483.227 mph shakedown run before mechanical problems ended the attempt, as noted on the team’s bio page for Jessi.

Just a few days ago, Combs tweeted a picture of her and the jet car as they prepared for this most recent speed record attempt…

Combs’ death was confirmed this morning on Instagram by Terry Madden, a member of Combs’ team…

Combs was a lot more than a very, very fast person; she was a skilled builder and fabricator, representing the American Welding Society, and even designing a line of women’s welding gear…

Combs was on television frequently, appearing on Overhaulin’, All Girls Garage, and even served as a host of Mythbusters.

Combs was an accomplished off-road racer as well, competing in the Baja 1000 and was the first woman to place at a King of Hammers event; in 2016 she had a 1st-place finish at the King of Hammers, earning her the nickname “Queen of Hammers.”

Combs was an impressive force in racing and motoring regardless of gender; but as a woman everything she achieved she did so despite the resistance of what is still a male-dominated world, and provided a valuable role model for other women in motorsport and hands-on automotive work.

To put Combs “accomplishments” in perspective, the first man to break the 400 mph barrier, not in a jet car but in a car with an internal combustion engine, was John Cobb at the Bonneville Salt Flats in 1947.  It’s 70 years later, and Combs couldn’t even break that mark with a car propelled by a jet engine.  Oh, and by the way, the land speed record for a man in a jet car is 739 mph by Stan Barrett, almost twice the speed that Combs was attempting.

Recently, the mainstream media provided non-stop coverage of the U.S. women’s soccer team winning the World Cup, but what they failed to mention is that a team of 15 year old high school boys in Texas had soundly beaten those women in an exhibition game prior to that “world championship”.

In trying to compete like men, women become like men, robbing themselves of their true feminine power in pursuit of the destructive myth  that women can do anything that men can do.  No, they can’t, and they will kill themselves trying.