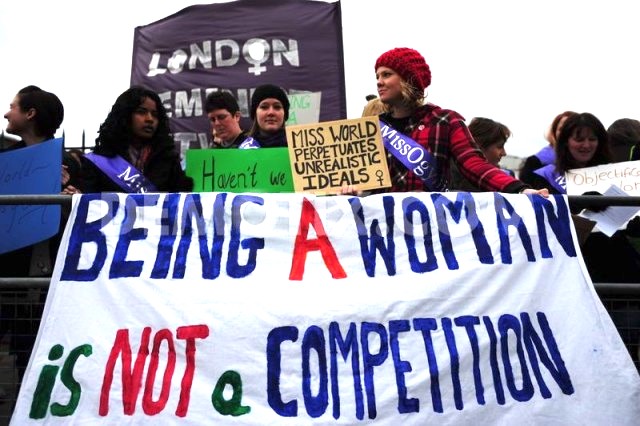 When the British government recently announced that it is raising the age at which women can start receiving their retirement pensions to 65 so that it equals the same age as men, feminists claimed the change was “unfair” to women:

The government is accused of failing to give women enough warning of the steep rise in the state pension age, which experts say leaves women poorer than men because it amplifies the effect of lower lifetime earnings.

The government said means-tested support was available for those struggling to manage.

“The decision to equalize the state pension age between men and women was made more than 20 years ago and achieves a long-overdue move toward gender equality,” said a spokesman for the Department for Work and Pensions.

In the past, British women were able to claim their pension at age 60, while men had to wait until they were 65, but the government has moved to gradually equalize their positions.

The overall pension age for both sexes is also due to rise to age 68 by the mid-2030s to offset longer lifespans.

A decision was first made in 1995 to lift the women’s pension age by 2020, but campaign group Women Against State Pension Inequality (WASPI) says many women were not informed for more than a decade afterwards.

The government then decided to speed up the process in 2011.

The changes particularly affected about 3.8 million women born in the 1950s who were approaching their pension age as the changes took place, said WASPI.

Some will have work six years extra, it said.

“For some women it’s absolutely devastating,” said Debbie de Spon, a spokeswoman for WASPI.
“We are angry that we have been treated this way having gone through our lives doing what was expected of us … A word we often hear is ‘betrayed’.”

WASPI is calling for a lower bridging pension for women born in the 1950s during the extra years they have to work or compensation for those who have reached pension age but have suffered as a result of the way the changes were introduced.

Experts said the move will leave women worse off than men because they usually have less saved for retirement.

A study carried out by pensions and asset management firm Aegon last December found that at age 50 women have an average pension fund of 56,000 pounds ($73,220) – half that of men.

The firm’s director Steven Cameron said it was “hard to argue against equalizing state pension ages”, but there was no doubt it left older women at a disadvantage to men.

“It has just made the gender pension gap overall bigger because up until now the one thing women had that men didn’t have was an earlier state pension age,” he told the Thomson Reuters Foundation.

Women have been demanding “equality” with men for almost 50 years, and now that they are getting it, they don’t like what they see.  They were warned almost 20 years ago that this equality of pensions was coming, but that hasn’t stopped them from disingenuously complaining that they weren’t given enough time to prepare.  These “liberated” women don’t save as much of their incomes as men, despite the fact that they often aren’t the primary earners in the household — which means they have acted as if their income wasn’t as important as the man’s so they spent it as if it were disposable.  And somehow this is all the fault of the government, not the women.

Liberating women from the home and their children was never promoted because it was good for women — it was promoted to break up families and double the tax revenue of the government by creating two income earners.  For the government, it’s a win-win situation as their income doubles, and they replace the men as the head of the families.  And if women can go out and earn their own livings, what do they need men for?  Feminism has created nothing but dissatisfaction and depression among young women, but that won’t stop them from continuing to demand even more impossibly levels of  “equality”.