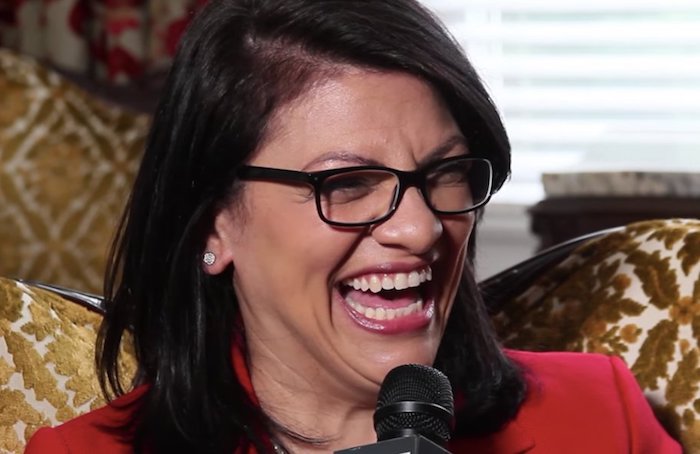 After being sworn in as the first Muslim woman in the U.S. Congress, Democrat Representative Rashida Tlaib vowed to her followers that her first order of business would be the “impeach the motherf**ker,” President Donald Trump:

As a self-described Palestinian-American she represents Detroit and the surrounding suburbs, and is being heralded as the new voice of the Democrat party.

To highlight Representative Tlaib’s professional and political ideology, and showcase the progressive resistance intent her regional constituency provides to the United States Congress, Ms. Tlaib delivered the following message to her enthusiastic supporters:

“People love you, and you win. And when your son looks at you and says, ‘Mama, look you won, bullies don’t win.’ And I said, ‘Baby, they don’t because we’re going to go in there, and we’re going to impeach the motherf**cker.”

Here we see the blind hatred that Muslims have not only for President Trump, but also for the White race who voted for him.  Tlaib doesn’t represent the American people — that was clearly never her intent because the American people voted overwhelmingly in favor of Trump despite the “official” rigged vote count.  And Trump has received huge support from White America primarily because of his anti-Muslim, anti-immigration policies to protect White America from the Soros-sponsored flooding of our ancestral lands.

Muslims aren’t coming to America to pursue the “American Dream”; rather, they come here to subvert and destroy it, because that’s exactly what they’ve been trying to do against Christendom for the last 1,400 years.  Christianity and Islam cannot “peacefully coexist” as the liberal utopians would like us to believe.  There will be an ultimate reckoning, and only one will survive in America and Europe, as the arrogant Tlaib and her radical followers will very rudely, if necessary, find out.