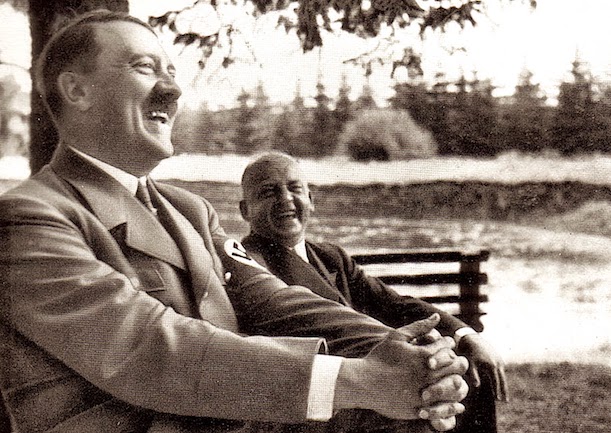 (Jewish Telegraphic Agency) To this day, there are millions of ‘conspiracy theorists’ who firmly believe that Adolf Hitler was Jewish — and that he was a front man for the Rothschilds — in reality, the first stories alleging that Hitler was Jewish — like this one from the Jewish Telegraphic Agency in 1933 — came from the Jewish press itself — and they did this simply to cast doubt on Hitler’s credibility because they feared his well-deserved popularity at their expense:

Herr Adolf Hitler of Germany would be covered with confusion if he dared to enter the strictly kosher home of Mrs. Rose Hitler, pretty young Jewish housewife, who lives at 233 E. 92nd Street, in the heart of Brooklyn’s Brownsville.

Mrs. Hitler, her husband, Fred, and their two children, Herbert, 9, and Rita, 4, confess that the German political trouble has made their lives extremely complicated.

Fred can’t get into a pinochle game anymore without some kibitzer calling him “Handsome Adolf”.

Little Herbert, who goes to P. S. 181, finds that existence is merely one scrap after another.

Rita, a vivacious girl, finds her big brown eyes filling with tears whenever her playmates tease her and call her a Nazi. “I ain’t a Nazzy”, says Rita; “I’m Jewish.”

Mrs. Hitler meanwhile must bear an endless round of wisecracks from shopkeepers who imagine she is joking when she tells them her name.

In the kitchen of her apartment, Mrs. Hitler stopped peeling potatoes for a few minutes to explain how she became a Hitler.

“Take my husband Fred”, she said. “He’s from Austria,” an ex-Austrian Jew. Now he’s an American citizen and when we got married I became Mrs. Hitler. My father-in-law, may he rest in peace, used to say when he was living that he never heard of a Hitler who wasn’t Jewish. Take my brother-in-law, Louis Hitler, who lives on Pulaski Street. Take all the other Hitlers in New York. . . .”

“Are there many Hitlers in New York?”

This entire story sounds like it was completely fabricated — a work of fiction — but either way, it’s full of holes.

Yes, there are many Jews named Hitler — Jews took German names as a matter of course — and Hitler was, no doubt, one of them.

The problem with this simplistic theory is that Adolf Hitler’s real family name wasn’t Hitler — it was Schiklgruber, the last name of his father, Alois, who was illegitimate.

The priest who filled out Alois Hiedler’s baptismal certificate spelled the surname “Hitler” instead of Hiedler, a common phonetic misspelling at that time, along with “Hüttler” and “Huettler”.

As a side note, researchers have also tried to discredit Hitler by pointing out that Johann Nepomuk Hiedler was of partial Czech descent, and therefore not “pure” Aryan — but the problem again is that the Czechs are Aryans — and “Slav” is a linguistic not racial identifier — a common mistake that even many National Socialists made.

All of Adolf Hitler’s family genealogy was exhaustively researched by German historian Werner Maser’s Hitler: Legend, Myth & Reality (1973) — and he also completely debunked the possibility that Hitler’s father was the illegitimate son of a Rothschild — and Werner Maser was not a Hitler apologist by any stretch of the imagination.

So if the Jewish press really wanted to do a more convincing job of smearing Adolf Hitler as a crypto-Jew, they would have tried to locate some Jews in Brooklyn with the unlikely last name Schiklgruber — but they weren’t clever enough to figure that out.

However, these Jewish fables die hard — conspiracy theorists found a gravestone in a Jewish cemetery in Bucharest, Romania, with the name Adolf Hittler inscribed on it — which provides all the prima facie “proof” that Adolf Hitler will always be a Jew. 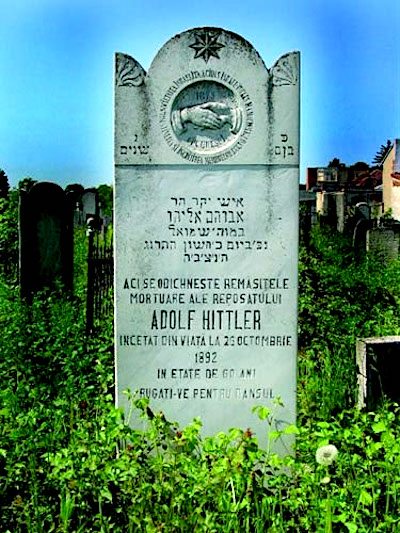