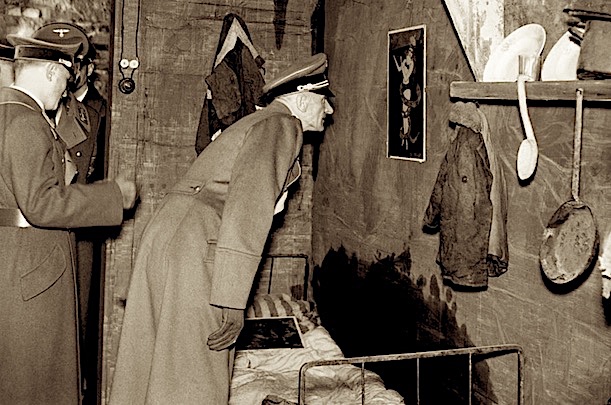 On May 13, 1942 eleven Jewish communists belonging to the Herbert Baum terror group — and the Werner Steinbrinck group (also called “Franka Group”) — carried out a cowardly arson attack on the exhibition “The Soviet Paradise” at Berlin’s Lustgarten.  Five German civilians were killed in the fire.

During Operation Barbarossa, the German military was absolutely shocked when they saw first-hand the actual living conditions of the average worker in Soviet-Communist Russia — the “worker’s paradise” promised by the Judeo-Bolsheviks turned out to be a living nightmare.

A decision was made to bring back some of the real-world evidence of the misery and devastation of life under Jewish-Bolshevism — to show to the German people what they were fighting against.  This material proof became the basis for a public exhibit ironically called “The Soviet Paradise”.

Communist Jews in Germany, of course, were offended by the exhibit — and hatched a juvenile plan to disrupt the exhibit with homemade explosives and incendiary devices.  Very little of the exhibit was damaged during their craven terror attack, but five innocent Germans were killed.  The Jewish terror group that masterminded the attack — along with other Jews  tangentially involved with their underground resistance movement were swiftly arrested and executed.

According to a German brochure describing the purpose of the exhibit,

The exhibition’s organizers often had the feeling that their portrayal of conditions in the Soviet Union was far from accurate.  This feeling has since been confirmed — but in an entirely different manner than expected. Everything that had been said about Bolshevism before the outbreak of the war with the Soviet Union has been thrown into the shadows by reality.  Words and pictures are not enough to make the tragedy of Bolshevist reality believable to Europeans.  This agrees with what our soldiers repeatedly say.  It is impossible to portray conditions in the Soviet Union without oneself having seen and experienced them.

The idea therefore was to provide German citizens with an exhibition based on everyday life under Bolshevism in order to show them the misery of life there.  A number of expeditions to areas held by our troops were made to gather the necessary original material for the exhibition.

Millions of visitors have received an accurate picture of the misery of life under Bolshevism through the numerous original items.  Experts, above all our soldiers, still agree that even this exhibition does not give a full picture of the misery and hopelessness of the lives of farmers and workers in the “Soviet Paradise.”

You can view the original German brochure from the exhibit “Soviet Paradise” here.

View numerous photographs of the exhibit here and here.

And for a sympathetic account of this Jewish act of terror, read the excerpt below.  And notice how this account conveniently leaves out the crucial detail that five innocent German civilians were murdered in the terror attack.

[Excerpted from the chapter, “Herbert Baum Groups: Networks Of Jewish, Leftist, and Youth Resistance in the Third Reich,” from the book The Human Tradition in Modern Europe: 1750 to the Present (2009) by John Cox]:

On 8 May 1942, Soviet Paradise, an exhibition staged by Nazi propaganda minister Joseph Goebbels depicting the poverty and degradation of Russia under its supposed “Jewish-Bolshevik” regime, opened with great fanfare in the Lustgarten square in Berlin.  One newspaper optimistically predicted that it would be “the most successful political exhibition yet…. Several million people shall visit.”

However, not everyone was quite as enthusiastic.  At approximately eight o’clock on the evening of 18 May, several explosives ignited around the periphery of “Soviet Paradise”.  Although fire trucks responded quickly, a portion of the installation burned that evening.  The German press was predictably silent, but news of the attack spread by word of mouth, and the dictatorship suffered a rare embarrassment.  Had Goebbels and his immediate superior, Adolf Hitler, known the identity of the saboteurs at the time, they would undoubtedly have been even more enraged: this bold action was perpetrated by young Jews — moreover, they were German Jews who belonged to leftist organizations.

The Gestapo was too efficient and methodical to allow such an act to go unpunished.  Within days, the police had rounded up, tortured, and sentenced to death most of the members of two underground groups led by Herbert Baum, who had organized the attack.  While the spectacular assault on “Soviet Paradise” increased the outside world’s knowledge of the internal leftist opposition, the Baum groups had already earned a reputation within the German underground resistance.

Herbert Baum had begun building his network of dissident groups and circles in the first days of the dictatorship, and it would become the largest organization of German-Jewish resisters.  The story of the Baum groups is also significant because it is only one example of a broader history of anti-Nazi activism among young Jews living under Hitler’s reign of terror….

“Words and pictures are not enough to make the tragedy of Bolshevist reality believable to Europeans,” began the exhibition’s accompanying pamphlet, so Goebbels’s team assembled a collection of dilapidated shacks and other ramshackle buildings to illustrate the “misery and hopelessness of the lives of the farmers and workers.” Rita Zocher, a friend of Herbert Baum’s since childhood, recalled that “Soviet Paradise” was replete with “a great big pile of dung . . . old apartments, old farmers’ huts,” depicting a society in which “nothing [was] newly built” and “the people were all robbers and criminals.”

The catalog accompanying “Soviet Paradise” was explicit in its anti-Semitism and in its identification of Judaism with bolshevism.

Werner Steinbrinck had been working as a lab technician for about two years at the Kaiser Wilhelm Institute in Berlin.  He was able to purloin a kilogram of explosive black powder, as well as a flammable solution, carbon disulfide.

He also went to a library, by coincidence only a couple of hundred meters west of the Lustgarten, and borrowed a book on fireworks.  On Sunday, 17 May, Steinbrinck brought the materials he had procured from his workplace to Joachim Franke’s apartment, and the two worked for several hours constructing a few rudimentary explosive devices, while Franke’s wife Erika attended to the couple’s eight-year-old son.

Beginning at seven o’clock the next evening, eleven members of the Baum and Franke groups made their way to “Soviet Paradise” in groups of one or two.  Marianne Baum and Hilde Jadamowitz arrived first, mingling with a crowd that grew to number approximately two thousand visitors.  Steinbrinck made his way to the Lustgarten and handed Baum one of the explosive devices.  Franke was to deposit another one in a cupboard in the so-called Speisehaus, or meal room, of the ersatz Soviet village.  The conspirators were compelled to look for another location, however, upon finding that the Speisehaus was closed that day.

Steinbrinck joined Franke, and they threw one of the explosives into a shack that was part of the exhibit, and then fled the scene when another device, held by Steinbrinck in a briefcase, began to emit smoke. They tossed it into a sewer drain a few blocks away.  When Herbert Baum’s small firebomb also malfunctioned and began incinerating the bag that contained it, Baum fled the exhibit, as did the other members at about the same time, approximately an hour and a half after most of them had arrived.

Despite these difficulties, Baum and his compatriots had succeeded in placing one firebomb, which burned the shack and a small part of the exhibit before firefighters arrived and a large police contingent cordoned off the area.  Although the Baum and Steinbrinck-Franke groups had damaged a minor part of “Soviet Paradise,” the exhibit opened as usual the next day.

The German press dutifully neglected to report the incident, but the Gestapo set to work immediately, forming a special investigating committee.  Heinrich Himmler, in his capacity as chief of the Gestapo and of all the German police, received a telex that afternoon informing him of the “sabotage attack on the anti-Bolshevik exhibition, the ‘Soviet Paradise.’”

Steinbrinck had planned to meet Baum five days later, on Saturday, 23 May, but that meeting never took place.  At noon on 22 May, Herbert and Marianne Baum, Gerhard Meyer, and Heinz Rotholz were arrested at their workplace, the Elmo-Werke.  Joachim Franke, Werner Steinbrinck, and all the members of their group were arrested the same day.  Another four dozen people — some of whom were only tangentially linked to the Baum groups were arrested in June and July.

The courage and spirit of defiance of many of the young resisters is evident from the transcripts.  Heinz Rotholz stated, “I wish to add that I knew about the preparations of the sabotage action against the ‘Soviet Paradise.’  Had the comrades not excluded me from the act because of my Jewish appearance, I would have gone on Monday to the exhibit and taken part in the act.”

Lotte Rotholz told her inquisitors, “One must utilize every opportunity to fight against the present regime. . . . But one thing was clear to me: as a Jew I must not lag behind….my ties were and remain with Baum.”

Herbert Budzislawski stated that he was compelled as a Jew to fight “injustice in Germany”— the only way, as he saw it, to find a way to “live in Germany as a human being.”

The police dragged Baum back into the Elmo-Werke plant, hoping that he might reveal some of his collaborators or that some of this friends would inadvertently expose themselves when they saw their badly beaten comrade.  This effort failed.

On 11 June the Gestapo informed the state prosecutor that Herbert Baum had been declared a suicide, although it is likely that he had been tortured to death in the three weeks after his arrest — in either case, a victim of state terror.

The Gestapo kept no interrogation records on the case, and simply noted, without providing a coroner’s report or other evidence, that Baum had “hanged himself”.

At least three other members of Baum’s groups died in police custody, either murdered or by their own hand.  All told, thirty-two members and supporters of Baum’s groups were executed or otherwise murdered by the German authorities over the next year and a half.  Sixteen of those executed were no more than twenty-three years old. Most were charged with “high treason” and tried before the Nazis’ “special courts,” which prosecuted political crimes.