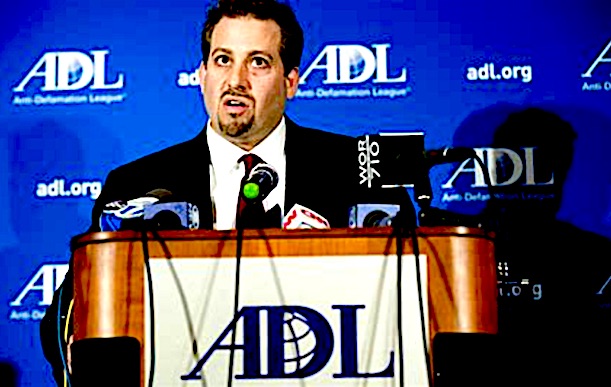 This 1994 case was big news in Denver when a jewish couple, Mitchell and Candace Aronson, in a fit of paranoia thought that their non-jewish neighbors, the Quigley’s, were trying to run them out of town just because they were jewish, so the Aronson’s took their beef to the jewish mafiosos at the Anti-Defamation League, who proceeded to publicly smear the Quigleys as antisemites:

‘At a 1994 news conference, the ADL accused the Quigleys of perpetrating the worst anti- Semitic incident in the area since the slaying of Jewish talk-show host Alan Berg 10 years earlier. They were accused of launching “Operation Aronson,” an effort to run their Jewish neighbors, Mitchell and Candace Aronson, out of town. Criminal and civil complaints filed by the Aronsons against the Quigleys, however, were eventually dropped by prosecutors or dismissed, and the Quigleys counter-sued the ADL, which had championed the Aronsons.’

The Quigleys claimed that the Aronsons, upon the advice of the ADL, began tape-recording the Quigleys’ cordless telephone calls and making notes of other clashes….[they] said the ADL “orchestrated a monstrous invasion of their privacy and a destruction of their good name.”

The ADL and Aronson’s had received legal advice that it was legal to tape cordless telephone calls. Their lawyers and the Deputy District Attorney with whom they conferred had been unaware that the statute had recently been changed to require a court wiretap order for cordless phone calls. There was a lot of embarassment all around, as the DA in Colorado dropped the criminal intimidation charges against the Quigleys. The lawyers were sued and settled. The ADL did not settle, and the case went to trial in 2000. The Quigley’s were represented by one of Denver’s finest civil litigators, Jay Horowitz. They won. The case has been on appeal since, and last week [in 2004] the Supreme Court refused to accept the case for review. The ADL has just paid up:

A 2000 New York Times article has more details of the case and allegations. You can read all the ugly details in this 10th court opinion (html) upholding the judgment against the ADL.

Reactions from the parties (from today’s Denver Post article linked above):

‘In a written release, the ADL said it is “disappointed” that the U.S. Supreme Court denied a petition seeking a review of the judgment against the organization. The ADL will continue to fight “hatred, racism, bigotry, extremism, anti-Semitism and threats to our democracy.”

The Aronsons, who have since divorced, “could not be reached for comment.“

Not surprisingly, all the links to this case from the above-cited article have been scrubbed from the internet.  This is how the ADL fights anyone who opposes them.

The sole purpose of the Anti-Defamation League is to defame anyone — especially White people — who dares to criticize any Jew anywhere for any reason, and that includes the foreign State of Israel, which makes the ADL an illegal and unregistered foreign agent.

The FBI has successfully investigated and prosecuted the ADL for illegal domestic spying, and yet despite that, the FBI now partners with the ADL to monitor the U.S. population for ‘hate crimes’, most recently investigating whether or not it’s okay to be White.

Either way, if this case with the Aronsons teaches us anything, it’s that Americans need to start suing the ADL every single time they publicly accuse anyone of being an antisemite, which given the disproportionate weight of this smear, can ruin anyone’s reputation and cause serious financial damages.  They need to be financially punished to the point that even uttering the term ‘antisemite’ becomes a prohibitive liability.