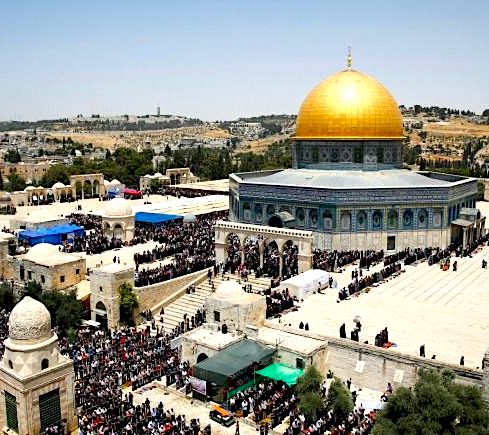 Likud MK Ehud Yatom, who as a former Shin Bet official was one of the commanders of the operation to seize the members of the “Jewish Underground” terror group, said Sunday that the group was “very close” to carrying out a planned multiple bombing against Muslim holy sites on the Temple Mount in 1984:

Yatom was responding to a statement by Public Security Minister Tzachi Hanegbi, who confirmed Saturday that the security establishment had identified rising intent among current right-wing extremists to carry out a Temple Mount attack to derail Israel’s planned withdrawal from the Gaza Strip.

Security sources have said possible actions included an attempt to crash a drone packed with explosives on the Temple Mount, or a manned suicide attack with a light aircraft during mass Muslim worship on the Mount. Other possibilities include an attempt by right-wing extremists to assassinate a prominent Temple Mount Muslim leader, perhaps from the Waqf Islamic trust.

Yatom, speaking on Army Radio of the Jewish Underground of the 1980s, said, “We were very close, close as touching blood, to a most serious terrorist bombing, as members of the Underground planted five bombs in five buses, which were then to convey innocent civilians and tourists.

“We were close, very close, to a situation in which people with truly distorted, wicked minds, tried to strike a place very sacred to Muslims on the Temple Mount.”

Speaking on the Channel Two “Meet the Press” program Saturday, Hanegbi said: “There is no information about specific individuals, because the Shin Bet and police would not let them continue [with their plot]. But there are troubling indications of purposeful thinking, and not detached philosophy … There is a danger that [extremists] would make use of the most explosive site, in the hope that a chain reaction would bring about the destruction of the peace process.”

Yatom, a member of the hawkish wing of the Likud and a strong opponent of the disengagement plan, said that in the wake of warnings by Hanegbi and the Shin Bet of potential Jewish extremist activity, “I am indeed fearful, and I do not wish to return to those terrible, tense days of 1980-84 in which the Jewish Underground was active with its wicked plans, may the Almighty protest us from them.”

Had an attack succeeded 20 years ago or in the current period, the effect would have been similar, and “horrible, terrible,” he said. “It would have meant the entire Muslim world against the state of Israel and against the Western world, a war of religions,” Yatom said. “With all of their pain and suffering, today’s terrorist attacks would be nothing compared to what could happen – even World War III.”

Knesset members petitioned Attorney General Menachem Mazuz to take steps against Yehuda Etzion after the right-wing activist called blowing up the Dome of the Rock, the gilded mosque at the center of the Temple Mount compound, a “worthy” goal during a radio interview on Sunday.

…According to Hanegbi, “We sense that the level of threat to the Temple Mount from the standpoint of extreme and fanatic Jewish elements carrying out a terrorist attack in order to reshuffle the cards, to serve as a catalyst to a change in the entire political initiative – this level has risen in recent months and more so in recent weeks, more than at any time in the past.”

It’s disingenuous to claim that these jewish terrorists are “extremists” in any real way.  They simply recognize that it is not a question of IF the Muslim mosque on the Temple Mount is going to be destroyed but rather WHEN it will be destroyed.  And there are many messianic Jews in Israel who expect the mosque to be destroyed at any moment — it can’t be soon enough.  And now that the U.S. has moved Sheldon Aldelson’s embassy to Jerusalem, the Temple Mount is next.

But it’s also disingenuous to claim that destroying the mosque on the Temple Mount will precipitate World War III.  If the Jews destroy the mosque, what can the Muslim countries that surround Israel really do about it?  None of them, including Iran, have the ability to attack Israel and “wipe it off the map.”  With U.S. unconditional backing, Israel can take out the mosque any time they want.  Sure, the Muslims will screech about it, but that’s about all they can do.