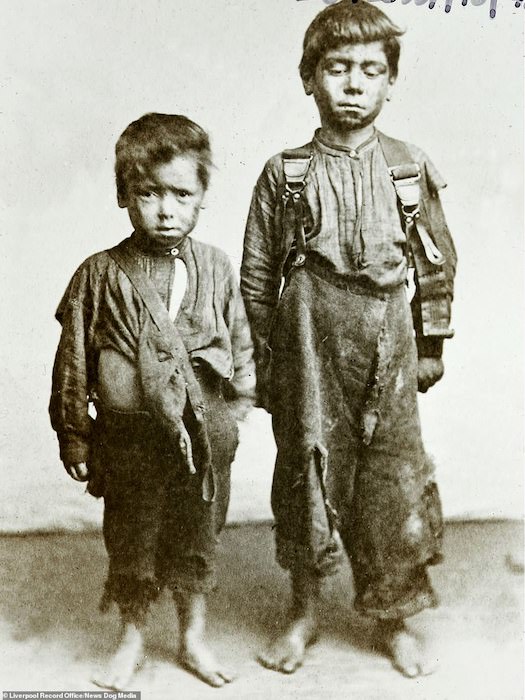 The definition of poverty in today’s America would be considered wealth to the poorest White children living in the late 1800s of Victorian England:

These harrowing images are part of an unearthed set of photographs from Liverpool taken in the Victorian era.

The pictures paint a bleak portrait of what life was like for the downtrodden children at a time of rapid change in a period of intense industrialization.

Bare-footed, dirt on their face and their clothes torn – three small children look helplessly into the camera.

Meanwhile a little girl stands on a pub table singing for the punters, hoping for some spare change.
Being poor in Liverpool at the turn of the twentieth century almost guaranteed a life in a slum, most likely to the north of the city as many of the factories were located there.

Children were expected to work long hours in dangerous jobs for minuscule wages.

The poorest Black family in America today live like kings compared to England’s poorest who had no welfare, no government programs or education.  In fact, Black slaves in America were treated better and had better living conditions compared to the poorest “free” Whites living in England and elsewhere on the European continent.  There were no laws against exploiting child labor, and all poor children had no choice but to work in factories to help their families eke out a bare living.

Millions of White children died under these squalid conditions, and had they been Black, we would never hear the end of it today, but because they were White, no one — especially White liberals — have any sympathy for them.  But then again, unlike other races, Whites don’t obsess about past wrongs that were done to them; rather, they pick themselves up, dust themselves off, and work hard to improve themselves and those around them.  But, in a culture that idolizes victimhood, these White children are remarkably invisible.