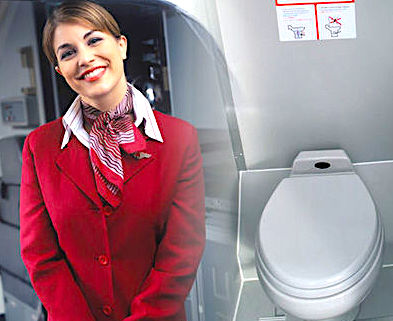 An abandoned human foetus was found on a FlySafair flight that was scheduled to take off from Durban, South Africa at 06:15 on Friday:

On its website, FlySafair said: “FlySafair regrets to inform customers of a delay to flight FA411 this morning from Durban to Johannesburg.

“Upon final checks of the waste management system our teams encountered a finding which requires formal investigation from technical teams and police authorities. The issue which has unfortunately meant that the aircraft would be unable to operate this flight.”

It did not specifically state that the “finding” was a foetus, but passengers tweeted that a human foetus had been found in the plane’s waste management system.

“We can confirm that a foetus was found on an aircraft and it is a police matter,” Naidoo reportedly said.

Kirby Gordon, head of sales and distribution at FlySafair, told News24 on Friday morning that he also understood that a foetus had been found.

“Police are investigating and the plane should be released to us soon.”

According to Gordon, all affected passengers had since been accommodated on other flights.

“At this stage we are unable to comment on the finding other than to say that the relevant authorities were immediately alerted and are performing a thorough investigation. FlySafair will do anything we can to assist them in their efforts,” the company said in a statement.

“Our teams are working with the relevant parties to initiate a backup plan. At this stage we are evaluating the time required to initiate necessary repairs versus deploying a new aircraft.”

KwaZulu-Natal police spokesperson Colonel Thembeka Mbele said in a statement: “We can confirm a foetus was found in a toilet by cleaning staff inside [an] aircraft at an international airport earlier [on Friday] morning. A case of concealment of birth is [being] investigated by King Shaka Airport SAPS.

How difficult would it be to locate the Black female who boarded this airplane while obviously pregnant?  No doubt, a quick scan of the airport surveillance cameras would identify the culprit within hours, but this is South Africa, and investigators will be in no rush to make another Black “look bad” and provide more “fodder” for “racists”.  And if the perpetrator is indeed identified, we will be reassured that she had a perfectly “reasonable” explanation why she had “no choice” but to flush her newborn child down the toilet during a flight.

It would seem that throwing away newborn babies is a rather routine event in Black South Africa, and we shouldn’t be so quick to judge the mothers too harshly, as this ritual must be a legitimate and time-honored part of their ancient culture, and to morally judge this behavior would do nothing to improve “race relations” in such a “vibrant” and “diverse” society like South Africa.  We need to “trust” that Black South Africans know what they are doing, and if we can just suspend our “prejudice” for a minute, perhaps we can learn something valuable here that we can apply to our own lives.