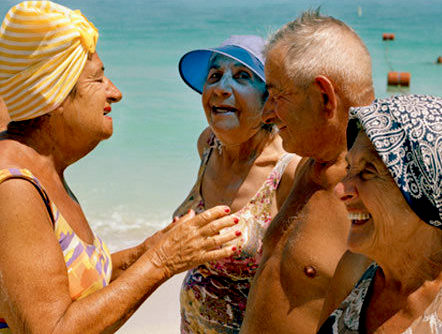 Police on Wednesday arrested a jogger accused of spitting on an elderly Jewish couple and threatening to sexually assault another group of Jews while running along up-scale Collins Avenue in ultra-wealthy Bal Harbour in March:

Starikov approached the first group at 11 p.m. as they spoke with each other in the 9600 block of Collins Avenue, clenching his fists and banging them together as if readying for a fight, according to a police report.

“I’ll show you,” he told the group, according to the report. “I’m going to shove my d— down your throats. You Jews, I’m gonna get you.”

About five minutes later, as the group fled to a nearby condominium, Starikov confronted another group of Jews in the 9900 block of Collins Avenue, police said. He spat on two elderly members of the group after making a noise with his mouth that sounded like “blowing a raspberry,” according to the report.

Both groups told police they felt Starikov targeted them because of their faith. The incidents occurred during Sabbath. Most of the men wore yarmulkes, and one other was dressed in a black coat and wide-brimmed hat that is customary attire for Hasidic Jews.

He was booked into the Turner Guilford Knight Correctional Center on Wednesday. He had previously been held at the jail following an arrest on charges of battery on a law enforcement officer and resisting an officer with violence. He was released in March pending trial.

…He said the village’s Jewish residents are “not easily shaken” and that the incident “only serves to strengthen the community further.”

Though the village, which has less than 3,000 residents, now has a thriving Jewish community, it also has a past history of anti-Semitism and racism. For 36 years, the exclusive Bal Harbour Club barred Jews and blacks from joining the club through deed restrictions. That practice came to an end in 1982 after the club was hit with a $10 million discrimination lawsuit.

Groisman said a 2017 anti-Semitism ordinance passed by the Village Council expanded the police department’s ability to investigate incidents of anti-Jewish acts as hate crimes. The ordinance, which codified the definition of anti-Semitism, allowed officers to investigate anti-Semitic acts as violations of village law when considering if they violate state or federal law.

This incident must be an example of that “white privilege” everyone is talking about these days — South Florida is up to its eyeballs in truly violent street crime, assaults, and rape, so it’s remarkable that the over-worked police can take two months off investigating these serious violent crimes to pursue a jogger who allegedly made some elderly Jews feel “unsafe” with some name calling and an alleged “violent” spitting incident.

Spitting seems to be a recurrent theme in the lives of many Jews.

But, of course, we’ve heard only the allegations from the elderly Jews, not from the man arrested, so we really don’t know if any of the allegations have any merit — or perhaps what the Jews themselves might have done to provoke the jogger.

We do know that elderly Jews tend to make up highly improbable stories of surviving “genocidal” plans to kill millions of them, and use their left over skin to make saddles and lampshades, and use their lice-infested hair to make childrens’ dolls and mattresses for wealthy German ladies.

So just in fairness to this jogger, we should probably wait to hear his side of the story.