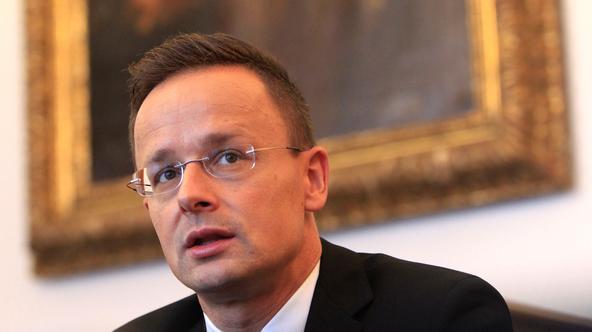 During an interview on CNN, Christiane Amanpour attempted to shame Hungary’s Foreign Minister, Peter Szijjarto, for his country’s insistence on remaining historically White and Christian:

“We have been a Christian country for a thousand years, and I do not understand why it would be bad to keep it like that.”

The interview resembled a culture Marxist interrogation, where Szijjart had to explain to the uncomprehending Amanpour why Hungary doesn’t want to fill the country with immigrants from the third world.

He pointed out, among other things, that Hungary will remain a Christian country and not accept multiculturalism, and that it will never allow an “invasion” of illegal immigrants.

Christiane Amanpour did not understand at all why a European country would pride itself on such an immigration policy.

She pointed out that less than two percent in Hungary were born in another country, and called it “strange” that Hungary’s Prime Minister Viktor Orban expressly has said that he wants to “preserve the Christian Hungary”.

Peter Szijjarto replied that it is not strange at all, but “honest”. Amanpour stated that it was his personal point of view.

The Hungarian top politician said it must be up to each nation to decide on its own future. He stressed that Hungary had never judged other countries that chose multiculturalism over homogeneity.

“Let each country decide for itself, and let us decide whether we want a multicultural or a homogeneous society. I understand that you disagree, and I respect that”, he said.

Amanpour then argued, possibly without understanding what she really said, that the Hungarian government is wrong, and that Hungary has no “immigration problem”. She pointed out that of Hungary’s 10 million inhabitants there are less than 4,000 refugees, that the country has no major crime and that no terrorist attacks have occurred.

“Because we fought against it, otherwise we would have had these problems,” replied Szijjarto, pointing out that Hungary is following the Schengen Agreement by protecting its borders and only accepting people with valid ID documents.

The nation wreckers know that they have no hope of destroying any country that insists upon remaining White and Christian, which is why the jewish-controlled media has been relentless in attempting to demonize any country like Hungary or Poland which refuses to be cowered into accepting their own ruination as most of western Europe already has.

What is happening in these former Soviet-bloc countries is remarkable considering that for almost 70 years under communisim there was a large suppression of Christianity while those in “free” western Europe were able to openly practice their faith.  What did western Europe do with that “freedom of religion”?  They largely became atheists who embraced the values of their jewish overlords, the Rothschilds.  What have these former Soviet-bloc countries done with their new freedom?  They’ve dug their heels in and insisted on remaining Christian — because they experienced the alternative in godless communism.  The kings of the east may, in fact, be instrumental in saving Europe.