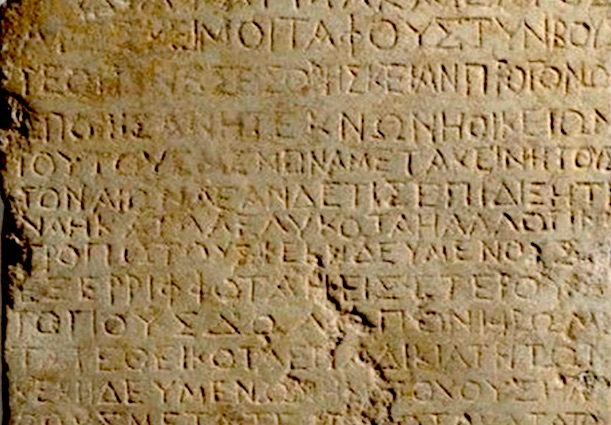 Using hi-tech isotope analysis, scientist have identified the origins of the marble used in making the so-called Nazareth Inscription, a 22-line imperial Greek edict against grave desecration that some have claimed constitutes the oldest physical evidence of early Christianity:

It was discovered in Paris in 1925 with no provenance, aside from an obscure journal entry from its deceased owner that it was “from Nazareth.”

Now, however, the search for its origins has gained a hi-tech boost with a new isotope study probing the the marble on which it’s carved. According to the study, the elemental makeup of the marble slab does not indicate a connection between the Nazareth Inscription and the eponymous Holy Land city associated with Jesus Christ. Rather, it was quarried on the Greek island of Kos.

According to the authors of “Establishing the provenance of the Nazareth Inscription: Using stable isotopes to resolve a historic controversy and trace ancient marble production,” published in the monthly peer-reviewed Journal of Archaeological Science, their study is the first known use of “stable isotope analysis to identify the quarry of an important inscription whose provenance was unknown.”

The study was carried out by scholars from the University of Oklahoma and Harvard University in the US and Université de Lorraine in France.

The Nazareth Inscription is a 60-centimeter tall, 37.5-cm wide, and 6-cm deep (roughly 23.5 x 15 x 2 inches) slab of marble upon which are etched 22 lines of text that, to some scholars and Christian believers, hearken to Jesus’ resurrection. The edict was translated into Greek from Latin, but its meaning is clear: An unnamed Roman emperor threatens dire consequences for disturbing corpses or tombs.

In a translation included in the isotope study, the emperor states, “Edict of Caesar. It is my pleasure that graves and tombs which anyone has prepared as a pious service for forebears, children, or members of his household are to remain forever unmolested… No one whatsoever shall be permitted to remove them. If anyone does so, however, it is my will that he shall suffer capital punishment on the charge of desecration of graves.”

According to French epigrapher and historian Michael Langlois, “the inscription is of special interest to Christianity because it condemns the disturbance of tombs and removal of corpses.” He cites the Book of Matthew, the first gospel in the New Testament, in which Jewish Temple priests suggest that Jesus’ empty tomb (Chapter 28, Verse 13) is a result of his disciples removing their leader’s body during the night.

The idea of corpse removal “is presented as an excuse for his disappearance by those who reject the resurrection account. So, if a Roman ruler from the time of Jesus condemns such activity, it is tempting to connect it to the biblical account — and even to suggest that it was written precisely because of Jesus’ resurrection!” Langlois told The Times of Israel in an email.

…The impetus of antiquities collectors to prove that the Bible is historically accurate makes them easy prey to forgers, said Langlois. “But I fail to see what kind of historical discovery would lead someone to become a believer. Faith, by definition, exists when we have reached the boundaries of science. I do not need to have faith that 2+2=4,” mused Langlois.

“As we celebrate the resurrection of Jesus Christ, let us remember that this is a matter of faith. Actually, this is arguably one of the greatest acts of faith for Christians throughout the world,” he said…

While the study heavily leans toward the Nazareth Inscription being quarried on Kos in light of the tomb desecration of local tyrant Nikias, it cannot resolutely negate the possibility that it once also stood in Nazareth, especially taking into consideration the contemporary diplomatic connections to the Herodian courts.

“It opens the intriguing possibility that the marble used in the Nazareth Inscription traveled to Palestine on commercial networks that mirrored political networks – indeed linking Kos and Galilee – which are also visible in the epigraphic and historical records,” write the authors.

The title of the original article from the Times Of Israel misleadingly claims that this new ‘scientific’ evidence ‘shatters’ the proof that the original inscription supports the historical accuracy of the resurrection of Christ, but it’s clearly more wishful thinking on the part of the jewish author.

But the ‘evidence’ does no such thing; in fact, the article concludes that the marble could very well have been mined on the island of Kos and transported to Galilee where the inscription was carved.

We previously published the compelling and detailed back story of the Nazareth Inscription, which this new article conveniently ignores.

But if you are a Jew who desperately wants to destroy any corroborating evidence that supports the belief that Christ was indeed the promised Messiah, who did indeed rise from the dead, then nothing will convince you otherwise.

And Easter becomes the perfect time to publish this anti-Christ propaganda.