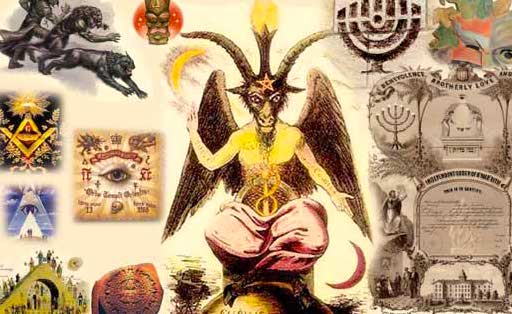 Confirming what we have reported before, leaders of the Freemason movement in Paris urged members not to attend events organized by France’s Jewish communities because of their support for Israel, which they said increases antisemitism:

The circular issued this week by the Grand Orient of France received attention in the French media partly because of how anti-Semites and conspiracy theorists there often target Freemasons as a branch of world Jewry.

The reference to Israel appeared in a draft resolution circulated during this week’s congress of the Grand Orient in Rouen, Le Parisien reported Tuesday. It was rescinded and senior Freemasons said it had been sent out by mistake, but the original document was obtained by bloggers covering the movement, which has tens of thousands of members.

The document called CRIF, the umbrella group of French Jewish communities, “a follower of policies” promoted by Israel of “religious extreme right-wing ideology” that leads to “divisions and rise in anti-Semitism.” The draft resolution has not been adopted.

Francis Kalifat, the president of CRIF, told Le Parisien that he was “infuriated” by the text, which he called a “scandalous manifestation of far-left ideas” from the France Unbowed movement led by the communist populist politician Jean-Luc Melenchon, who is a Freemason.

In 2017, a French Freemason leader said he was assaulted on the street by a woman carrying a hammer who called him a Jew.

During the Nazi occupation of France and under the country’s pro-Nazi puppet state, Freemasonry, a rationalist and secretive movement that began in the 17th century, was banned.

Of course, this doesn’t just apply to France — Jews all over Europe are resented for the ongoing genocide of the Palestinians, and it shouldn’t take a high-level Mason to figure that one out.

And yet we are constantly admonished that claiming masonry is Jewish is just an age-old antisemitic “canard”, despite the fact that Jews, in their own writings, have admitted that masonry is, in fact, based on Judaism from top to bottom.

Here are just a few of those direct quotes proving that this isn’t just a “canard” repeated by “antisemites”:

“The spirit of Freemasonry is the spirit of Judaism in its most fundamental beliefs; it is its ideas, its language, it is mostly its organization, the hopes which enlighten and support Israel. It’s crowning will be that wonderful prayer house of which Jerusalem will be the triumphal centre and symbol.”
—“La Verite Israelite,” Jewish paper 1861, IV, page 74

“The most important duty of the Freemason must be to glorify the Jewish Race, which has preserved the unchanged divine standard of wisdom.  You must rely upon the Jewish race to dissolve all frontiers.”
—“Le Symbolism,” July, 1928:

“Each Lodge is and must be a symbol of the Jewish temple; each Master in the Chair, a representative of the Jewish King; and every Mason a personification of the Jewish workman.”
—“An Encyclopedia Of Freemasonry,” Philadelphia, 1906

“The Grand Lodge Masonry of the present day is wholly Jewish.”
—“Manual of Freemasonry” by Richard Carlile, 1825

“Masonry is a Jewish institution whose history, degrees, charges, passwords and explanations are Jewish from beginning to end.”
—Rabbi Br. Isaac Wise, in “The Israelite of America,” March 8, 1866

“At the head of all those secret societies, which form provisional governments, men of the Jewish race are to be found.”
—Benjamin Disraeli, Jewish Prime Minister of England, in “The Life of Lord George Bentick”

“I think I have proved sufficiently that Freemasonry, as what concurs symbolism, lays entirely on a formation which is essentially Jewish.”
—Bernard Stillman, Jew, in “Hebraic influences on Masonic Symbolism,” 1929, quoted “The Masonic News,” London

“The influence of the Jewish Sanhedrin is today more powerful than ever in Freemasonry.”
—O.B. Good, M.A. in The Hidden Hand of Judah, 1936

“The technical language, symbolism and rites of Freemasonry are full of Jewish ideas and terms . . . In the Scottish Rite, the dates on official documents are given according to the era and months of the Jewish calendar, and use is made of the Hebraic alphabet.”
—“Jewish Encyclopedia,” 1903, Vol, 5, page 503

“The B’nai B’rith are but a makeshift. Everywhere that Freemasonry can admit that it is Jewish in its nature as well as in its aims, the ordinary lodges are sufficient for the task.”
—”B’nai B’rith Magazine,” Vol. 13, page 8, quoting Rabbi (and mason) Magnin

“The Coat of Arms used by the Grand Lodge of England is entirely composed of Jewish symbols.”
—“Transactions Of The Jewish Historical Society,” Vol. 2, p 156