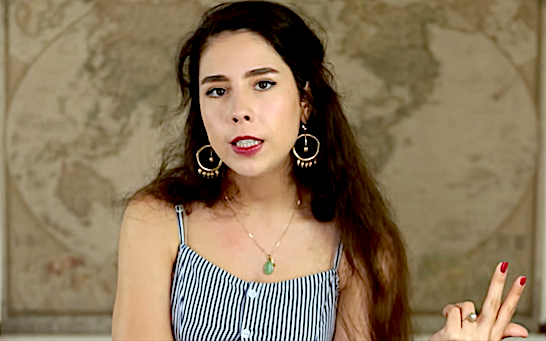 The French YouTube feminist known as ‘Charlie Danger’ has been called out on her self-righteous demand that every woman has the right to parade around in public topless without being harmed if that’s her choice:

Earlier this month, Charlie Danger, who has the YouTube channel ‘Les revues du monde’ with about 587,000 subscribers, was invited to Toulouse in France to give a TED Talk where she talked about the differences between women, and their urge to compare themselves to other women.

She also said that, if they want to, women have as much right as men to walk around with their breasts exposed in places where men also walk with their shirts off, like on the beach, or while shopping on holiday.

While she received loud applause after her talk, the reactions under the YouTube video that the organisation had posted were less positive. She has received several death threats, and one commenter said that he would recommend her to walk through the municipality of Molenbeek in Brussels with her breasts exposed so she would be raped there.

Translation of tweet: “Hi @TEDx and @tedxisaesupaero; I was more than happy to accept your invitation and to participate in this experience. On the other hand, since the video has been online, various threats against me (death, rape, etc.) have been made and no moderation has been done.”

Image in tweet: “I advise you Molenbeek to be the first dancer with bare breasts, you will also be the first raped in a gang in front of your other dancers who will run away! Ah feminism 2.0, what a cognitive dissonance! It’s too late, the islamic-left-wingers have shot a bullet in their own foot and you won’t change anything, that will teach you to have chosen the wrong target. P.S. I’m laughing because… I won… I’m a white male, straight, over 35 years old.”

This so-called ‘Charlie Danger’ looks no more ‘French’ than Alfred Dreyfus, but since ‘French’ feminism has long been dominated by Jews who happen to reside in France, she is merely a walking cliche.

Feminists have been making this pretentious demand of ‘equality’ for generations: women should be able to walk naked down a dark alley in a city at night if they want to.  Only then will men and women be truly ‘equal’.

Should White men be able to walk into a dangerous ghetto at night even fully clothed?  That’s a far more important question.

If there are places were White men cannot safely go in their own countries, then there is something fundamentally wrong, and that, of course, can largely be blamed on the feminist taboo: diversity.

If every community were White and Christian, anyone, male or female, could walk wherever they wanted without fear of being harassed, robbed, attacked, raped, killed, set on fire, or all of the above.

But the French long ago boasted they were far too ‘sophisticated’ and ‘enlightened’ to be Christian, leaving them to complain about the consequences of turning their back on Christianity — they are held hostage by Muslim rape gangs.