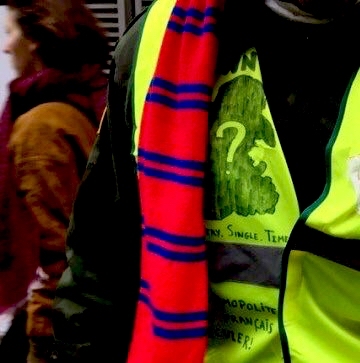 It seems that enough of the Yellow Vest protesters have raised “The Jewish Question” to make high-level Jews in France hysterically demand that the protests now be suppressed and their freedom of speech be curtailed:

Le Parisien today (19 February) has an interview with Frances Kalifat, president of the CRIF (Representative Council of Jewish Organisations of France), the main Jewish ethno-activist organisation in France. All major French politicians are expected to attend its dinners and pay court to it it, except those of the Front National (now renamed Le Rassemblement National), whom, being defenders of French interests, are systematically excluded.

Is France experiencing a strong uptick in antisemitism?

Frances Kalifat: Clearly, yes. The increase of 74% in 2018 of antisemitic acts means that the Jewish population of our country, which represents less than 1% of the overall population, is the focus of more than 59% of the racist acts committed.

Is it stirred up by the Gilets Jaunes?

Frances Kalifat: The movement has radicalised and been infiltrated by conspiratorial movements, the far right, the far left, Islamo-leftists and Salafists. It gives them the opportunity to come and express their hatred of Jews, Israel, during these demonstrations on Saturday.

What should be done?

Frances Kalifat: Drastic measures must be taken to bring these demonstrations to an end, which are no longer used to make claims about purchasing power but instead express hatred of institutions, the Republic and Jews.

You are calling for the demonstrations to be banned?

Frances Kalifat: There is a constitutional right to demonstrate, but a way must be found to make them stop, in any case to channel them. Only demonstrations declared in writing beforehand need to be permitted; prevent the others. We can’t continue like this, Saturday after Saturday.

Tomorrow evening, at the CRIF dinner, what do you expect of the President?

Frances Kalifat: Actions, forceful decisions. We need strong measures to stem this wave of antisemitism that is eating away at our country. It’s time to move from statements to action by applying the rule of zero tolerance.

Frances Kalifat: First, apply the laws. For example, calling for boycotts is prohibited, but each week small groups go into shops to call for boycotts of Israeli products or the Eurovision [Song Contest] in Israel! These people are not punished. I demand that the sanctions imposed on each antisemitic act are strong enough, severe enough, to be dissuasive. This is not the case. I am calling for a specific plan to be set up to combat antisemitism.

Some MPs are proposing a law to criminalise anti-Zionism, is this a good idea?

Frances Kalifat: A European Parliament recommendation adopted the definition of the IHRA which summarises in 11 points what antisemitism is. Negation of Israel is one of them. While making it clear that criticism of the State of Israel does not form part of what could be considered anti-Zionism. I expect France to adopt this recommendation. Because we know that the dirty Jew of yesterday has become the dirty Zionist of today, the attack on Finkielkraut* being the most recent example of this. Let us not let antisemites play on words any more to escape prosecution. We need new laws to take account of this new antisemitism that is advancing behind the mask of anti-Zionism. It is more than time that antisemitism was dealt with by the common law rather than the 1881 Law of the Press.

Frances Kalifat: When Dieudonné or Alain Soral** pour out their hatred on the social networks, they are judged in the same way as a journalist. This needs to go to the common law. We can’t keep antisemitism and racism in the Law of the Press, which protects freedom of expression in the press. And we demand the regulation of social networks. Germany has done it. We need the platforms to have someone who is criminally responsible in France, so we are not constantly referred to their home countries such as the USA, where they are protected by the 1st Amendment, or Russia where it is impossible to find them. In a similar vein, we need to remove the anonymity of the accounts that propagate hate.

Is antisemitism strong in difficult areas?

Frances Kalifat: We can’t ignore a reality: day-to-day antisemitic attacks are committed by young Muslims in difficult areas. This drives out French Jews who are living an internal exile there, for several years now we’ve been seeing synagogues and kosher shops closing in some districts. Those who can leave for quieter areas. Those who don’t have the means to leave, to pay a higher rent, although they are less numerous, endure a day-to-day antisemitism consisting of insults, graffiti, mail stolen from letterboxes, which makes life impossible.

In other words, the Jews are angry that the Arabs in France are treating the Jews like the Israeli Jews treat the Palestinians.  What a shock to jewish dignity.

Yet here we have that old antisemitic “canard” of a Jew who speaks out of both sides of his mouth.  He is forced to recognized that the French people have a constitutional right to free speech, but when they use that right to criticize Jews and Israel, well, stammer, stammer, “Something has to be done!”

What that “something” is exactly isn’t spelled out, but the Jews don’t care what it is or how it’s done, even if that includes changing the constitution to make it illegal to criticize any Jew anywhere for any reason.

It’s within our constitutional rights to complain all we want about the “government” or “the president” or “the parliament” or “the police”, but when we dare start peeling back the layers of the onion to see the hidden hand behind all of these goy fronts, we often see jewish money and power, and when we come to that truth, we officially become antisemites, just as many famous men have, such as Henry Ford, Charles Lindbergh, Thomas Jefferson, and Joseph Kennedy.