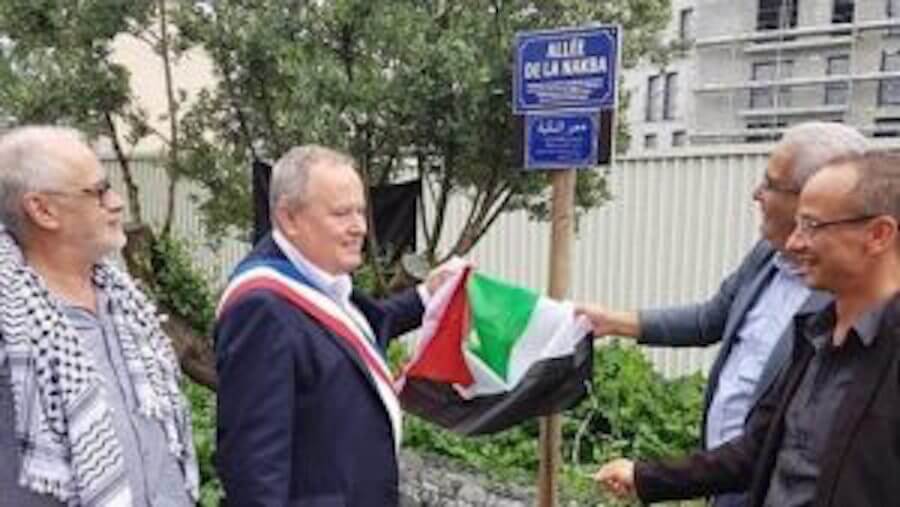 Intimidation and murder threats are nothing new to Jews when anyone dares to mention any of their crimes against humanity, especially the genocide of the Palestinians who happen to occupy a piece of desert that the Jews insist is all theirs:

A Paris mayor has been warned he will be ‘blown up’ after naming a street in honour of thousands of Palestinians forced out of their homes by the creation of Israel. Dominique Lesparre, 71, has also been hounded by assailants wearing black face masks who vandalized the new road sign within hours of it being unveiled on Tuesday.

The thoroughfare in Bezons, in the north west suburbs of the French capital, is now called Nakba Alley. It commemorates the ‘Catastrophe’ (Nakba in Arabic) of 1948, when some 800,000 Palestinians were expelled from their land because of the foundation of the Jewish State.

Amid scenes of immense violence, many of the Palestinians’ towns and villages were razed to the ground, and they were forced into refugee camps which exist to this day.

On Monday, the mayor posted on Facebook: ‘Very proud tonight [June 11] to inaugurate a Nakba alley (“the disaster”). ‘I have an emotional thought for the Palestinians who are forced to fight for the recognition of their state within the 1948 borders.’

Referring to Israel’s first prime minister, plaques placed around Nakba Alley read: ‘In memory of the expulsion of 800,000 Palestinians and the destruction of 532 villages in 1948 by the war criminal David Ben Gurion for the creation of the state of Israel.’

This sparked fury among Israel supporters in Paris, and by this morning, the plaques were covered in graffiti, and the road sign blacked out. All were then removed by local government officials who said they could ‘seriously disrupt public order’.

Mr Lesparre and his colleagues at Bezons town hall said they had received ‘a multitude of threatening calls’. The mayor was called a ‘Nazi Communist’ and told ‘we will kill you’, and ‘we will blow up the mayor’. Opponents in black face masks and on mopeds were also seen damaging the signs, and around the town hall.

Reports have now been filed to the police, who suspect extremist pro-Israel groups for the threats. One, the Jewish Defence League, has been behind a number of violent attacks around Paris in recent years, with key members ending up in court for their crimes.

It is strange how the Jews don’t seem to understand why the ultra liberal French sympathize with the plight of the Palestinians as they are being ethnically cleansed from their ancestral home lands by the Jews in Israel.

In the eyes of these rabid Jews, even these liberals are “Nazis”.

And we should encourage the Jews to continue to smear anyone and everyone who disagrees with them as Nazis as this tactic will eventually become completely meaningless and have no power to cower people any longer.

The Jewish Defense League is indeed a self-admitted terror organization — responsible for violent threats, bombings, and murder — if it were called the White Defense League, it would be outlawed and its members jailed on terror charges.

Instead of “defending” Jews, the JDL endangers Jews by increasing suspicion and animosity toward Jewish supremacists.

Perhaps that’s their goal — to get Jews so afraid that they moved to Israel.

But they cannot win the argument based on facts, so they always have to resort to name calling — that’s how you know they have no leg to stand on.