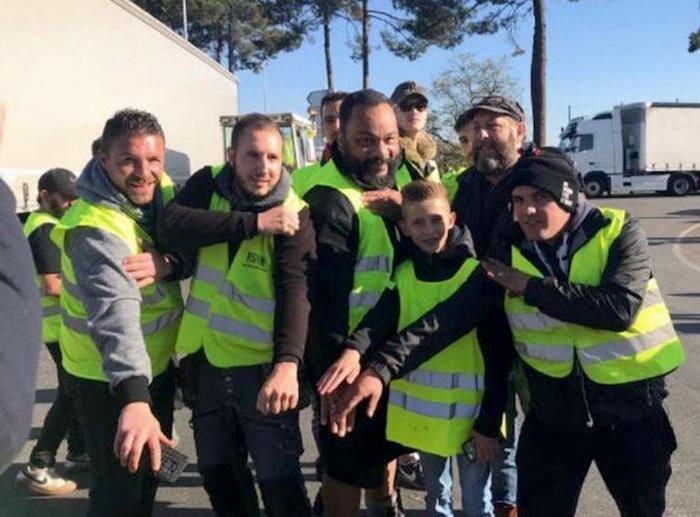 Jews around the world are on high alert as it has become increasingly apparent that many of the ‘Yellow Vest” protestors have finally figured out who is really behind their stagnant economy, high taxes, and unchecked Third World immigration:

France’s gilets jaunes protests have come under scrutiny after notorious antisemites were seen participating, and one journalist said its online support was “riddled” anti-Jewish messages.

Among those participating in the latest round of protests were comedian Dieudonné M’bala M’bala, known for creating the quenelle gesture. He has convictions for antisemitism.

An image of author Hervé Ryssen, a former member of the Front National, confronting a police officer while wearing a hi-vis jacket characteristic of the protests was featured on the cover of Paris Match magazine.

The publication was condemned by the International League against Racism and Antisemitism (Licra), who said: “Antisemites and Holocaust deniers rejoice because of the visibility you offer them!”

Other marchers have used President Emmanuel Macron’s connection with the Rothschild family in a derogatory manner, on social media and in television interviews.

Between 2008 and 2012 Mr Macron held a number of positions at Rothschild and Cie Banque, eventually becoming its managing director.

He said he had seen one message that said: “Macron is the President of the Jews.”

The JC searched on Twitter on Sunday for antisemitic pro-Gilets Jaunes messages and immediately found a supporter who had just tweeted minutes earlier about the need to “end Jewish control”.

French security forces have flooded into Paris to contain a fourth consecutive weekend of anti-Macron protests. Participants have been dubbed gilets jaunes, for the yellow hi-vis jackets they wear.

Initially motivated by rising fuel prices and high living costs, the movement has morphed into a broader anti-establishment protest.

Although the 280,000-strong movement has attracted extremists on both sides, it is not affiliated with any one political or ideological school.

In the past, Jews have traditionally used sarcasm to mock anyone who dares to claim that Jews are responsible for a country’s woes.  They claim that the goyim need to blame someone when the economy turns bad, and so they always pick on the Jews as a scapgoat.  To blame Jews for anything to do with the economy is irrational, despite the fact that Jews dominate banking, the stock market, and government spending.  Perhaps if they didn’t naturally gravitate to positions of extreme power over money, the goyim wouldn’t blame them when things go wrong, and they always go wrong when Jews run things.

As of now, the jewish-controlled media is portraying these protests in strictly economic terms, as if this is just a larger “Occupy Wall Street” socialist revolution, but nothing could be further from the truth.  Both the Left and Right will eventually unite together against a common enemy — the enemy, as the apostle Paul described them, of “all mankind.”  And when that happens, all flights from Paris to Tel Aviv will be booked solid.