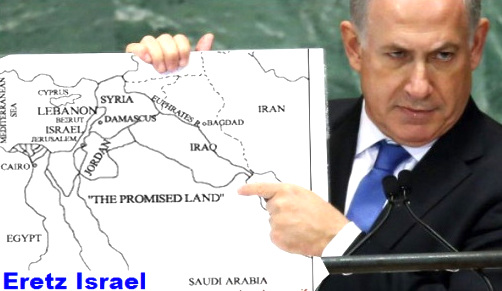 Amid escalating tensions and cross-border violence in the Gaza Strip, Israel’s Blue and White party leader Benny Gantz said Monday that the option of seizing the Gaza Strip in a mass military operation was “always on the table”:

“Capturing the Gaza Strip is an option that is always open to Israel, it’s within the capabilities of the IDF,” he told Channel 13 news, shortly after Israel struck targets across the coastal territory in response to a surprise rocket attack earlier on Monday.

“Whether to do so is a question that needs to be considered in regards to our ultimate goals,” he said in an interview from Washington, where he was attending the annual AIPAC conference.

“I think that at the moment, the answer is no, but it’s an option that’s always on the table,” he said.

In a separate interview with i24 News. his first in English, Gantz called for stern action against Hamas after a rocket fired from Gaza early Monday hit a house in Israel’s central region, injuring seven people, including two infants.

“We should have massive retaliation. We must restore the deterrence we created in Protective Edge,” he said of the 2014 Gaza War which he commanded as IDF chief of staff. “We cannot accept whatsoever any attack from the Gaza strip, whether its on southern communities or on central Israel. We have to retaliate firmly.”

While declining to divulge his specific proposals for how to retaliate, Gantz said he advocated using “all means, air, land, whatever it takes, defensive or offensive. We are far stronger than Hamas. Hamas knows it, and it must feel it now.”

Of course, Benny Gantz gives lip service to “diplomatic” solutions, but that’s just smoke and mirrors.  Make no mistake: the oligarchs that rule Israel ultimately want all of Gaza as part of Eretz or “Greater Israel”, just as they want the Golan Heights, the West Bank, and all of Jerusalem.  And if you think for a second that the Israelis are going to negotiate away control of any of these territories to the Palestinians, you are hopelessly naive.  There will be no long-term two-State solution.  The only “hope” for peace is for the Palestinians to “give up”.

The “Final Solution” to the Palestinian Question is really quite simple: all Palestinian-occupied land is part of “Greater Israel” and the Israelis will not concede one single square inch of it, and the sooner the Palestinians come to terms with that the better.  And now that Trump has illegally gifted Golan to the Israelis, they now have their sights on the West Bank and Gaza.  Even the liberal Democrats on Capitol Hill are worried that the emboldened Israelis intend to annex the West Bank next.  This isn’t just empty campaign rhetoric coming from Gantz: it’s a glimpse into the blood-soaked future of what is left of disappearing Palestine.