‘Gay Catholics’ Are The New ‘Cornerstone’ Of The Church: Fordham LGBTQ Conference 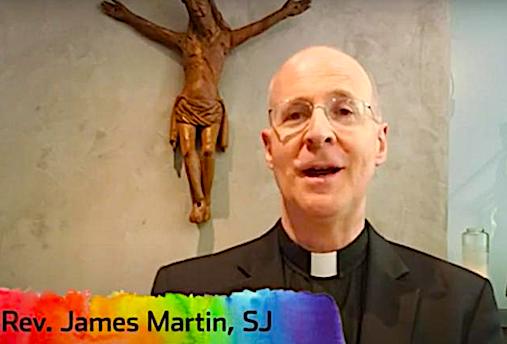 After the coronavirus pandemic forced Fordham University to postpone its planned “Outreach 2020” Conference for so-called “LGBTQ Catholics, they instead released a pro-Gay video extolling the virtues of sodomites and their vaunted place in today’s gay-friendly Church:

“We were all ready to go,” exclaims Fr. James Martin, S.J., “with the support of Cardinal Timothy Dolan, the Archbishop of New York; Fr. John Cecero, the Jesuit Provincial of the USA, Northeast Province; and Fr. Joe McShane, the president of Fordham University.”

The 43-minute video features many of the speakers who would have participated at the Jesuit-run Fordham University event.

The speakers offer one lie and false hope after another, often employing misapplications of Scripture to do so.

“LGBT Catholics in many ways are like Jesus, and that’s why they are a gift to our Church,” began Ish Ruiz, a religious studies instructor at San Francisco’s Sacred Heart Cathedral Prep.

Sister Luisa Derouen, O.P., a Dominican sister and “minister to the transgender community,” said transgender Catholics are on a “sacred journey” through whom God acts.

Archbishop John C. Wester of Santa Fe said it saddens him to think that “so many of our fellow Catholics experience isolation, loneliness, and even depression on an almost daily basis because of their sexual orientation or gender identity.”

…In the Outreach 2020 video, Wester said pro-LGBT Catholic ministers “are truly following in the footsteps of the Good Shepherd.”

…Megan Fox-Kelly, associate chaplain and director of retreats at the College of the Holy Cross in Worceter, Massachusetts, hinted that some students at her school are created by God to be homosexual and transgender and need to be affirmed in those identities.

“One of the most important parts of her work has been accompanying students in the LGBTQIA+ community … as they give voice to understanding their identity and the person that God created them to be,” said Fox-Kelly…

Another priest, Father Bryan Massingale of Fordham University, said in the video, “I’m obviously a Catholic priest, I’m obviously a black man, and not so obvious is that I’m also openly gay.”

In the wake of the George Floyd protests, Fr. Massingale asserted that gay men who “just aren’t turned on” by black gays aren’t expressing a preference; they are revealing “prejudice.”

Let’s face facts: the vast majority of priests — over 80% by recent estimates — in the Catholic Church are homosexuals.

The Church has had a “don’t ask, don’t tell” policy toward gays for centuries, which is exactly what you’d expect when you defy the Gospels and don’t allow the leaders of Christian congregations to marry.

And, of course, Fordham is run by Jesuits, the Order within the Church that was founded by converso Jews, which goes far to explain its role as the vanguard revolutionary front to finalize the destruction of the Church.

But the Catholic hierarchy is merely reaping what it has sown.

They allowed Edomite Jews in the Church from its very foundations — and these conversos made sure that Church doctrine was Judaized and welcoming to these anti-Christs.

Yet real Christianity, from its very foundations, was anti-Jewish — a complete rejection of the false babylonian ‘traditions of the elders’ that had infiltrated the faith — as demonstrated in Malachai, the final book of the Old Testament.

And the Church has chosen the Jews over Christ.

(And so have the Protestants, but that’s another story…)

But he Church was compromised long before the blatant capitulation to the Jews at Vatican II — that was merely the cherry on top of the cake.

Now they’ve replaced the myth that Peter was the ‘cornerstone’ of the Church with sodomites now filling that role.

One false myth replacing another — a house of cards that Revelations promised would be destroyed.

Is there anything left of the Church worth saving?