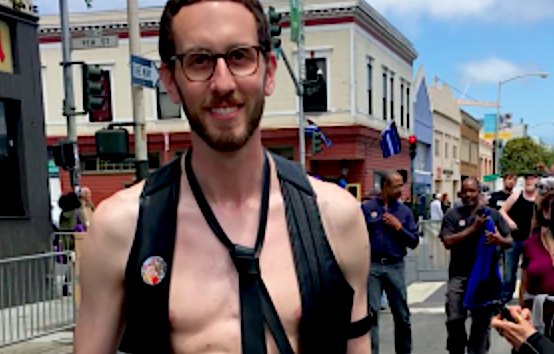 This distinction in the law — which is irrational, at best — disproportionately targets LGBT young people for mandatory sex offender registration, since LGBT people usually cannot engage in vaginal intercourse.  For example, if an 18 year old straight man has vaginal intercourse with his 17 year old girlfriend, he is guilty of a crime, but he is not automatically required to register as a sex offender; instead, the judge will decide based on the facts of the case whether registration is warranted.  By contrast, if an 18 year old gay man has sex with his 17 year old boyfriend, the judge *must* place him on the sex offender registry, no matter what the circumstances.

Until recently, that sex offender registration was for life, even though the sex was consensual.  Under 2017 legislation authored by Senator Wiener, registration is for a minimum of 10 years, still a harsh repercussion for consensual sex.

SB 145 does not change whether or not particular behavior is a crime and does not change the potential sentence for having sex with an underage person.  Rather, the bill simply gives judges the ability to evaluate whether or not to require registration as a sex offender.  To be clear, this judicial discretion for sex offender registration is *already* the law for vaginal intercourse between a 15-17 year old and someone up to 10 years older. SB 145 simply extends that discretion to other forms of intercourse.  A judge will still be able to place someone on the registry if the behavior at issue was predatory or otherwise egregious.  This change will treat straight and LGBT young people equally, end the discrimination against LGBT people, and ensure that California stops stigmatizing LGBT sexual relationships.

(SB 145 does not apply to intercourse of any kind with minors who are age 14 or younger.  For those crimes, mandatory sex offender registration will continue to be the case for all forms of intercourse.)

“SB 145 puts an end to blatant discrimination against young LGBT people engaged in consensual sexual activity,” said Senator Wiener. “This bill is about treating everyone equally under the law.  Discrimination against LGBT people is simply not the California way.  These laws were put in place during a more conservative and anti-LGBT time in California’s history.  They have ruined people’s lives and made it harder for them to get jobs, secure housing, and live productive lives. It is time we update these laws and treat everyone equally.”

In a rational and moral society, every homosexual would be considered a “sex offender,” but in the New Jewish Order, these deviants have become the new normal, the “moral” yardstick by which the rest of us will be measured.

A society that enacts laws that enable, encourage, and defend the rights of sodomites and pedophiles must, by necessity, discriminate against normal heterosexual people.

And since it’s “impossible” for a White Christian heterosexual to be “discriminated against,” these laws will serve only to muzzle any opposition to this moral subversion.

And self-serving Senator Weiner is being disingenuous when he states that this new proposed law won’t change prosecution of any current sex offenders — he knows full well that once the state no longer mandates that homosexual pedophiles be put on the “sex offender registry,” the next logical step will be to decriminalize the offense completely, which is their end game.

This isn’t about 18 year old gays going to jail for having sex with 17 year olds, as Weiner knows — it’s about 25 year old gay pedophiles having “legal” and “consensual” sex with 15 year olds.  And from there, anything goes.