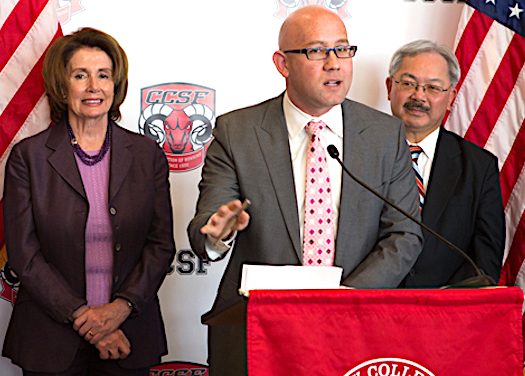 Gay bathhouses could have an easier time returning to San Francisco, after the board of supervisors, led by Jewish homosexual Rafael Mandelman, approved an ordinance that would ease restrictions for adult sex venues on July 21 with a unanimous vote:

This will amend the Heath Code, requiring the Director of Health to “adopt minimum health and safety standards” for commercial adult sex venues. It will also remove decades-old policies that required these businesses to monitor sexual activities and prohibited private rooms and locked doors.

These regulations were put in place in 1984, when the AIDS crisis was devastating gay communities in San Francisco. They specifically targeted sex clubs and gay bathhouses, and while sex clubs eventually reopened in the city after shuttering their doors, gay bathhouses never did, according to the Bay Area Reporter.

That could change after the COVID-19 pandemic is over (this new ruling will not affect the city’s reopening timeline). The ordinance, led by Supervisor Rafael Mandelman, will help “decriminalize sexuality” according to a press release by the San Francisco AIDS Foundation.

“It’s time for regulations that were put in place at a time of fear and a lack of knowledge to catch up with the progress we’ve made in the fight to end AIDS,” Joe Hollendoner, CEO of San Francisco AIDS Foundation, said in the press release. “With PrEP, U=U and other advancements in sexual health, bathhouse restrictions are antiquated and stigmatizing.”

PrEP is a daily pill that people can take to prevent HIV infections before potential exposure. U=U means “undetectable = untransmittable.” If someone has HIV and is being treated and the virus is sufficiently suppressed, then it cannot be sexually transmitted.

“What this ordinance will do is allow for adult sex venues to be apart of our economic and cultural recovery when it is safe to do so,” Mandelman said in a July 9 meeting. “During the ’70s and early ’80s, bathhouses were a focal point of gay social life in San Francisco, and were important community meeting places for friends to gather to share stories, dance to the latest disco hits, or watch a live show.”

Sure, allowing homosexuals to have anonymous sex in private rooms in sex clubs will spur an economic renaissance for San Francisco.

When America doesn’t allow gays to have anonymous sex in private rooms in sex clubs, they feel ‘stigmatized’ and ‘discriminated’ against — which could lead them to want to commit suicide, or so we are told.

The last thing a ‘healthy’ and ‘progressive’ society wants is for promiscuous homosexuals to feel that they can’t have sex whenever, wherever, and with whomever they want.

And it should surprise exactly no one that Jews like Mandelson are prodding the city to return to its pre-AIDS ‘hey days’ of unrestrained, unregulated gay libidos — what could possibly go wrong?

Another homosexual Jewish politician in San Francisco, Scott Weiner, is working hard to decriminalize pedophilia so that underage boys can accompany adult male homosexuals to these sex clubs without fear of prosecution and imprisonment.

This is why the Christian Byzantine Empire forbid Jews from holding public office or teaching children in schools.