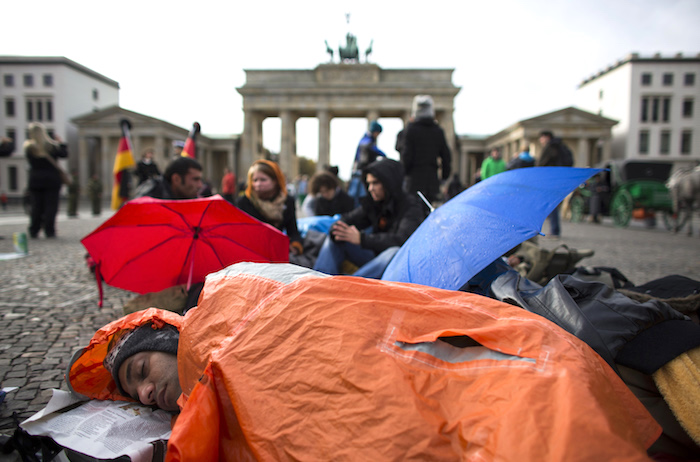 A female doctor, who originally came to Germany from the Czech Republic, is considering going home because she wanted to work in Germany “not the Middle East or Africa”:

Yesterday, at the hospital in Germany where I work,we had a meeting about how the influx of muslim immigrants from the middle east is simply unsustainable. Walk in Health Clinics cannot handle emergencies, being overwhelmed by the sheer numbers of serious health emergencies, they are starting to send everything to the hospitals.

Many muslims are refusing treatment by female staff here in Germany. The muslim men make sick, crude comments and overtures to the female staff members, because to them any non-muslim woman is a whore or a future slave. After brief exposure to these cruel, sadistic, female hating beats, we, women, are refusing to go among those animals, especially the muslim men from Africa.

Relations between the female hospital staff and muslim immigrants are going from bad to worse. Since, the assault and unreported rapes of German women last weekend migrants going to the hospitals must be accompanied by police with K-9 units.

Very high numbers of migrants have AIDS, syphilis, open TB and many exotic diseases that we, in Europe, do not know how to treat them.

If they receive a prescription in the pharmacy, when they learn they have to pay cash they become violent. They were told in the middle east that everything in Germany would be free. Everything would be handed to them on a silver platter.

Finding out that they MUST pay for certain things leads to loud, violent, outbursts, especially when it is about drugs for the children. Many of these muslim immigrants kidnapped children, so that, their social benefits would be higher once they landed in Germany.

Finding that they would have to pay for the children’s drugs, they gave up the ruse and abandoned the children with pharmacy staff with the words: “So, cure them here yourselves!”

Now, the police are not just guarding the clinics and hospitals, but also large pharmacies.

Truly we said openly: Where are all those who had welcomed in front of TV cameras, with signs at train stations?! Yes, for now, the border has been closed, but a million of them are already here and we will definitely not be able to get rid of them.

Until now, the number of unemployed in Germany was 2.2 million. Now it will be at least 3.5 million or higher. Most of these people are completely unemployable. A infinitesimal bare minimum of them have any education. What is more, their women usually do not work at all. I estimate that one in ten is pregnant with many children in tow.

…They know Germany and her citizens are very civilized. Add to that the world is watching, so these vicious, lazy, muslim youths know if they scream shout, and threaten violence, the German people will cave in.

I tell you, no one who has not come in contact with them has any idea what kind of animals they are, especially the ones from Africa, and how the muslim men and women act superior to our staff who are Christian. They look down upon us, verbally deride our Christian values and then demand that their every wish be granted immediately.

If, Germans with our generous nature cannot handle this, then the rest of Europe will be total chaos.

If this doctor leaves Germany, she certainly won’t be the first to do so, and besides the higher salary, what could possibly keep her there?  So she’s basically willing to risk her life every time she treats an African or Muslim male, but to her the risk is still worth the benefits.  The migrant invasion will depress German wages, while the wages in her native Czech Republic, which bans most migrants, will continue to rise.  In the long run, it’s better that she leaves now with her life.