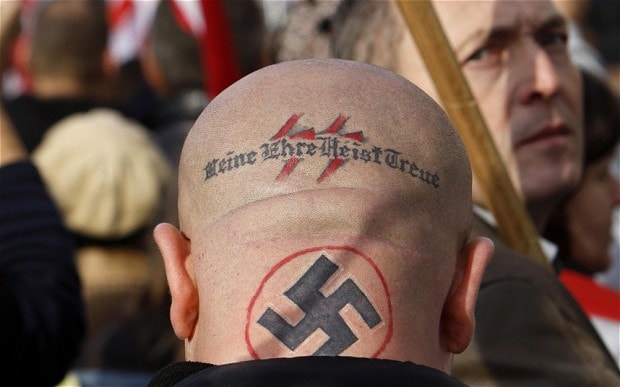 (Jewish Telegraphic Agency) According to the Frankfurter Allgemeine Zeitung — a prominent German newspaper — a group of influential Jews are throwing in their support for the anti-immigration AfD party:

The news – following polls showing the AfD as Germany’s second most popular party – came in a letter to the FAZ, the newspaper reported. The letter’s authors were not named.

Mainstream Jewish organizations and community leaders have condemned the AfD for its xenophobic views. In addition, some of its politicians have relativized the Holocaust and flirted with neo-Nazi groups, while claiming to be pro-Israel.

Apparently, among some Jews, fears of old-fashioned Nazism in the AfD are eclipsed by fears of new anti-Semitism among the more than 1 million Muslim refugees who have come to Germany since 2015.

News of a Jewish AfD club was met with swift condemnation from the non-partisan Jewish-German “Values Initiative,” which in a statement expressed “surprise and concern.”

“We believe that any involvement in this party is wrong, because it uses its alleged Jewish or Israeli friendship in particular to gain legitimacy for its agitation against Muslims,” according to the statement. It called the party’s failure to criticize its extreme right wing tantamount to an endorsement of neo-Nazism.

The new Jewish group would merely be used as “a fig leaf for coarse AfD racism,” the statement warned.

“Though there is a high level of anxiety among Jewish communities, there is still a high moral threshold preventing formal forms of engagement” with a far-right party, Lagodinsky, who is running for a seat in the European Parliament, said in an e-mail.

Just because the party has managed to woo some Jews “does not mean that they have managed to fool all Jews in Germany,” Lagodinsky said.

In fact, most Jews empathize with refugees from war, persecution and economic hardship, as Josef Schuster, head of Germany’s Jewish umbrella organization, frequently has noted.

As WWII was winding down, and the Soviet army was quickly approaching from the East, the prisoners at Auschwitz were given the choice by the Germans to retreat with the them back into Germany or stay and wait for the Soviets to “liberate” the camp.

Most Jews, like Elie Wiesel, chose to go to Germany with their “genocidal” captors rather than face the dreaded Soviet army of mongol rapists.

Jews themselves are responsible for this situation — they advocated for the flooding of Europe with Muslim Arabs and Africans who historically hate them.

Now, however, they have to ally themselves with Germans who  have been pushed to the “far right” by Jewish support of migrants.

Either way, Jews will join the AfD for one purpose — to steer it away from realizing that it was the Jews who created the Muslim problem in Germany from the beginning.

Without a Jewish problem, you have no Muslim problem — that is the conclusion that Germany must never come to.