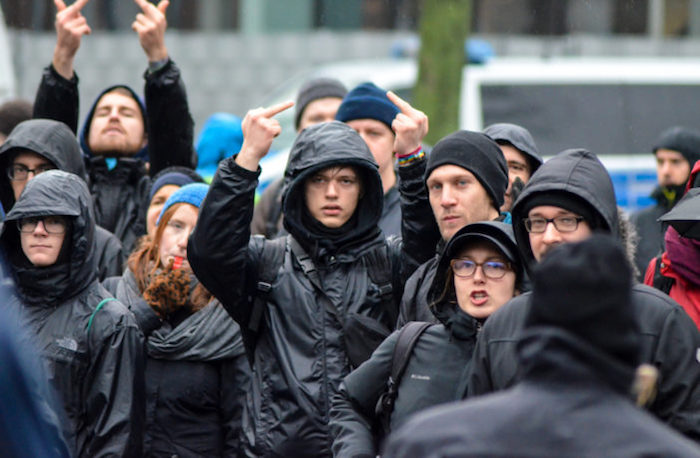 The Left is unwittingly creating “Nazis” every day by calling normal White people who are merely concerned about migrant violence “Nazis”, as is the case with this father in Germany:

Last Saturday, a father who’s son was killed by a Syrian migrant in 2017 was booed and called a Nazi by leftist activists and migrants.

In 2017, Markus Hempel, a 30-year-old man, was assaulted by African and Syrian migrants. He was hit by several punches in the face, fell over and hit his head on the pavement. He died a few hours later.

The alleged perpetrator is a 17-year-old Syrian who entered Germany in 2015. But the public prosecutor’s office determined at that time that the Syrian acted in self-defence against a ‘xenophobic’ attacker.

Marcus’s father filed a complaint for denial of justice against the Chief Prosecutor Folker Bittmann. The father also participated in a rally on Saturday where he reported on his sufferings, as he lost his son just a year ago.

But counter-demonstrators showed up, a group of Antifa and migrants, and booed him calling him a “Nazi”, which can be heard in the video below.

Participants of the rally reported that “the Bavarian Police let the counter protesters disturb the rally without intervening.”

If merely complaining about migrant murders makes you a “Nazi”, then the Left better be prepared for literally tens of millions of “Nazis” in the streets across Europe in the not-too-distant future.  If they think they have a problem with “Nazis” now, just wait until the White race awakens and picks up the ancient Cross their ancestors once bore.

It is astonishing how obvious it has become that the Left literally has a death wish–they not only are doing everything they can think of to destroy everything that is good around them, they are prodding the very people who, once awakened, will give them no quarter–just as the Left has been doing for years to the silent majority.