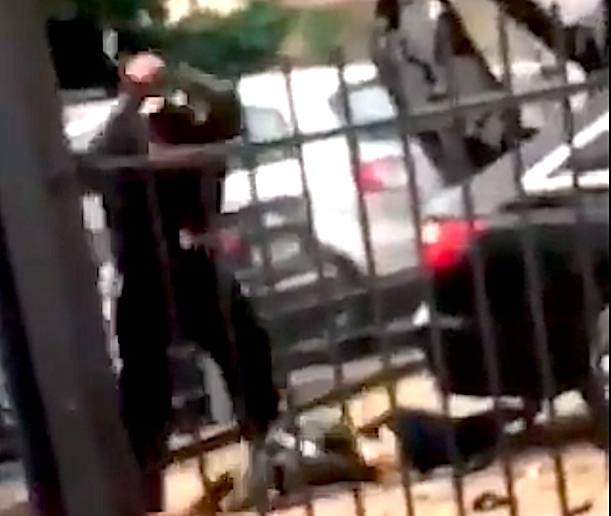 German police are threatening to prosecute anyone who shares a gruesome video of a 34-year-old Muslim man in Limburg who apparently ran over his 31-year-old wife with his car and then brutally killed her with an ax and a butcher knife:

The police reports that they’re investigating this as a relationship crime. The 34-year-old suspect was arrested at the crime scene without resistance by Limburg police.

Witnesses gave accounts shortly after the crime that the suspect first drove over the victim with his Audi about 8:25am. The 31-year-old woman was walking alongside the road on the sidewalk.

Thereafter the 34-year-old suspect exited his car and proceeded to beat the woman where she was lying on the ground with an object in his hands. The woman was so severely injured in the attack that she died at the scene. After witnesses called the police, they immediately arrived and promptly arrested the 34-year-old without any resistance. Specialists for the criminal police have begun to secure the crime scene and investigate it for forensic evidence.

The police have been told that there may possibly be more videos and photos of the crime. They are asking persons who have such videos or photos to not publish them on the Internet but instead to give them to the police for evidence.

“Police West Hessen: Since it is of such burning interest, the 34-year-old suspect is a German citizen. He was born and raised in Germany, but doesn’t have a German name. Just how important this is for the investigation is not clear as of today.”

“We have reports that there are videos of the crime floating around on the internet. Refrain from sharing — we will consequently pursue criminal procedures against EVERYBODY who posts and shares video of this, due to depiction of violence (article 131 StGB)!”

We saw this kind of censorship before when Swedish police threatened to prosecute anyone who shared the video of two Scandinavian women being beheaded in Morocco on a backpacking trip.

These videos must be censored for obvious reasons: they will awaken the television-numbed public to the reality that this mass “diversification” of Europe with Third World savages has indeed succeeded in destroying Christian Europe just as it was meant to.

And if you dare awaken anyone to this fact, you will be treated far worse than the murderer in the video.

And don’t hold your breath waiting for public outrage from the powerful feminist groups in Germany.  They would rather see women executed and hacked to death in the public square than be accused of “islamophobia” or “racism”.

Yes, this brazen pubic execution will be investigated as a “domestic disagreement gone bad” case, and those caught distributing the video will be prosecuted for crimes against women and Muslims.

Diversity is indeed someone’s strength, but it isn’t ours.