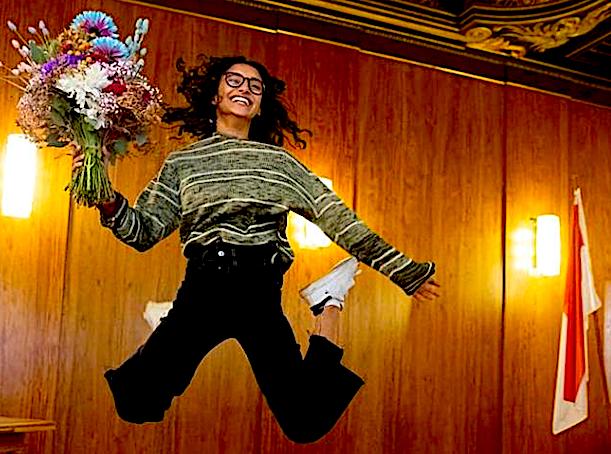 In German-speaking parts of Europe, the so-called ‘Christ Child’ takes Santa’s place as the children’s gift-giver, and for the next two years, the world-famous Christmas Market in Nuremberg will be opened by a mixed race Indian girl:

Nuremberg authorities have thrown their weight behind the 17-year-old girl who was criticised by local right-wing politicians for her newly-assumed role as the symbol of the Christmas Market.

Benigna Munsi, 17, was born in Nuremberg to an Indian father and German mother. Last Wednesday, a jury chose her to be the Christkind, or Christ Child.

The Nuremberg Christkind, traditionally played by a young woman, is selected every two years and is tasked with opening Nuremberg’s landmark Christmas Market, which attracts around two million visitors every year.

This role also implies charitable duties and visits to kindergartens, schools, hospitals, and nursing homes. The Christkind also acts as the city’s ambassador when visiting Christmas markets elsewhere in Germany and Europe.

Munsi is the first mixed-race Christ Child in Nuremberg’s history, and the local branch of the anti-immigrant Alternative for Germany party wasn’t happy.

“Nuremberg has a new Christ Child. One day, we’re going to go the way of the Indians,” the group said in a comment posted to Facebook, according to the DPA news agency — apparently suggesting that Germans were being eliminated in the same way as Native Americans.

The AfD has since deleted the post and apologised for it, the report says.

Speaking to reporters on Sunday, Mayor of Nuremberg Ulrich Maly of the Social Democratic Party voiced his support for Munsi and said the comments bore “an openly racist connotation.”

So you’re a “racist” in Germany if you think being racially replaced and wiped off the map in your own country is not a ‘positive’ development.

Germans are indeed being ‘eliminated’ in the same way that the Native Americans were, except it took hundreds of years to do that while the Germans are slated for minority status in a matter of only a few more decades.

The browning of Germany has happened at a mind-bogling pace — what two World Wars failed to do, mass immigration has virtually completed.

And this race-mixed Indian girl is a perfect symbol of that racial suicide, as the largely atheistic White Germans have replaced the worship of Christ, their pure-blooded Israelite King, with the deification of a mixed-race mongrel, the ideal symbol of the decadence and destruction of the God-less German people.

In the not-too-distant future, the only racially pure Germans remaining will be the Germans who have not turned away from Christ who promised to preserve those Israelites who followed Him.