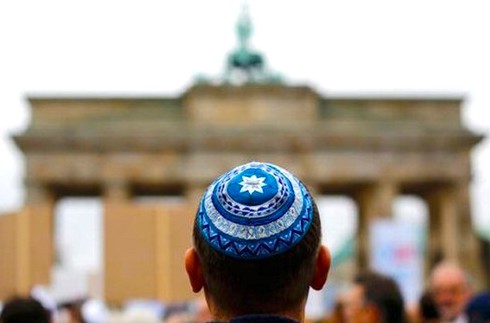 Germany’s anti-Semitism commissioner on Monday called on Germans to wear kippas in public to show solidarity with Jews:

“I call on all citizens in Berlin and everywhere in Germany to wear the kippa on Saturday, when people will agitate unbearably against Israel and against Jews on Al-Quds Day,” Felix Klein said in an interview with the Funke media group.

Klein added that people should participate in pro-Israel rallies on that day instead, German outlet Deutsche Welle reported…

Germany’s most-read tabloid, Bild, printed a cut-out kippa over the weekend for readers to wear in solidarity with their Jewish neighbors.

“If even one person in our country can’t wear a kippah without putting themselves in danger, the only answer is that we all wear a kippah,” Bild’s editor-in-chief Julian Reichelt tweeted on Sunday. “The kippah belongs to Germany! That’s why tomorrow the kippah will be printed for cutting out on page one.”

Klein caused an uproar in an interview published Friday in the Berliner Morgenpost in which he said that he could not recommend that Jews wear a kippah everywhere and any time in Germany.

Later, Klein said his statement that he “could no longer recommend that Jews wear the kippah everywhere in Germany should be taken as an alarm signal.”

If a public official in Germany even suggested that everyone in Germany wear Christian crosses to show national solidarity in the wake of several Christian churches which have been repeatedly vandalized and desecrated, the Jews and Muslims would have a collective apoplectic fit, but that’s the true nature of “diversity”, which is a one-way street toward their Talmudic Utopia, with the ultimate goal of Jews having all the guns, money, and power just so they can feel safe to walk the streets among the people they oppress and marginalize.

The jewish elite, however, want the average Jews to feel unsafe, and if some Jews have to be victimized by violent Muslim “antisemites” whom they imported to destroy the White Christian culture in Germany, then so be it.  This is the exact strategy outlined and admitted to in the 9th Protocol of the Learned Elders of Zion, which states, “Nowadays, if any States raise a protest against us it is only pro forma at our discretion and by our direction, for THEIR ANTI-SEMITISM IS INDISPENSABLE TO US FOR THE MANAGEMENT OF OUR LESSER BRETHREN.  I will not enter into further explanations, for this matter has formed the subject of repeated discussions amongst us.”  Average Jews are being played like a fiddle just like the rest of us.