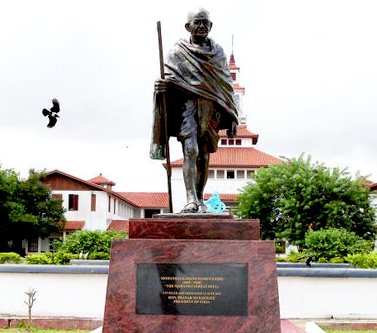 A statue of Indian independence leader Mahatma Gandhi has been removed from Ghana’s most prestigious university after complaints that he was racist against black Africans:

India’s former president Pranab Mukherjee unveiled the statue to the global peace icon at the University of Ghana in Accra two years ago as a symbol of ties between the two nations.

But lecturers soon began a petition calling for its removal, citing passages written by Gandhi claiming that Indians were “infinitely superior” to black Africans.

The online protest was one of a number on university campuses in Africa and beyond about the enduring symbols of the continent’s colonial past.

The Gandhi statue on the university’s Legon campus in Accra appeared to have been removed overnight Tuesday to Wednesday, students and lecturers told AFP.

The head of language, literature and drama at the Institute of African Studies, Obadele Kambon, said the removal was an issue of “self-respect”.

“If we show that we have no respect for ourselves and look down on our own heroes and praise others who had no respect for us, then there is an issue,” he said.

“If we indeed don’t show any self respect for our heroes, how can the world respect us? This is victory for black dignity and self-respect. The campaign has paid off.”

Student Adelaide Twum said the move was “long overdue”. “I’m so excited. This has nothing to do with diplomatic ties,” she added.

Another student, Benjamin Mensah, said: “It’s a massive win for all Ghanaians because it was constantly reminding us of how inferior we are.”

The university authorities refused to comment while an official at Ghana’s foreign affairs ministry said only: “It’s an internal decision by the university.”

Ghana’s former government had said the statue would be relocated “to avoid the controversy… becoming a distraction from our strong ties of friendship” with India.

Campaigners in Malawi are currently trying to stop a statue of Gandhi going up in the capital Blantyre, also arguing that he used racial slurs against black people.

Though Gandhi is more commonly remembered for his non-violent resistance to British colonial rule in his native India, his legacy in Africa is more mixed.

Everything Gandhi said about Black Africans was basically true, which may come as a shock to many, considering he’s been heavily promoted by the jewish media as their poster boy for their much-anticipated liberal utopia of peace, love, and understanding.  Contrary to how the media portrays India, it is actually one of the most racist societies in the world, and Gandhi naturally adopted the racial pecking order of its caste system.  In India, the whiter you are, the higher up the social food chain you could aspire.

But when Gandhi found himself living in South Africa, he quickly became the equivalent of an “untouchable”, and he deeply resented the idea that White South Africans often treated Indians as if they were merely Blacks.  His racial animus toward Blacks was consistent with the racial mantra, “If you aren’t better than a negro, who are you better than?”  And so he had a vested interest in convincing Whites that Indians were far superior to Blacks, and that it was wrong to equate the two.  Yes, Gandhi was a racist, but he was also a homosexual, which should be a far more legitimate reason to remove his statue.