Greatest Threat To Jews Today Not ‘White Supremacists’ But The Radical Left, Their Own Creation 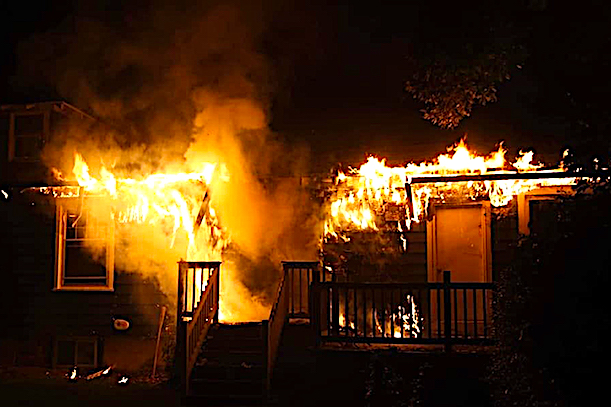 The recent arson attack on the Chabad House at the University of Delaware has forced some Jews to come to terms with an uncomfortable reality — that the greatest threat to Jews today in America is something of their own creation: the violent radical Left, led by BLM and Antifa, not so-called ‘White supremacists’ that the tiresome ADL drones on about:

We should never be complacent about anti-Semitism from the far right. But to pretend that the carnage in America’s cities is the work of anyone but the far left, associated anarchists and some elements of the Black Lives Matter movement is not merely false but a transparently politically motivated sleight of hand maneuver.

While Jews have not been a priority target for rioters—instances of vandalism in Los Angeles and Kenosha notwithstanding—the connections between the intersectional ideology that is officially embraced by BLM ideologues, and anti-Semitism and anti-Zionism, is a matter of record…

To pretend that these acts [of violence] were somehow committed in equal measure by the inconsequential numbers of right-wing provocateurs, or that it was all inspired by the Trump administration that has sought unsuccessfully to stop the violence against the wishes of their political opponents who govern strife-torn cities, is also gaslighting.

It is hardly surprising that left-wing and liberal groups that have, against the best interests of the Jewish community, endorsed the BLM movement would buy into this myth in order to help their allies in the Democratic Party. But doing so is still an act of breathtaking mendacity.

For three months, much of the mainstream media has either downplayed the violence associated with the protests or encouraged and rationalized it.

Prime-time CNN host Chris Cuomo has consistently asserted, “Please, show me where it says protesters are supposed to be polite and peaceful.”

New York Times staffer Nikole Hannah-Jones, a conspiracy theorist and principal author of her paper’s misleading and wildly inaccurate “1619 Project” that alleged that America is an irredeemably racist nation, took pride in the burning and looting. She said “it would be an honor” for the violence to be called the “1619 riots.”

An NPR show offered a forum to Marxist author Vicky Osterweil, whose book, In Defense of Looting defended the violence as a justified tactic and mass theft as “a redistribution of property in an unequal society.”

But as the fall election campaign looms on the horizon, some on the left have awakened to the fact that the “unrest” and talk of defunding or even abolishing the police they have encouraged might help Trump’s re-election efforts. As a result, they are now seeking to shift the blame to him or to a vague threat of white nationalist anti-Semites rather than to the people who have been doing the rioting and those who encouraged them.

The main point to be derived from this shabby con game is not a defense of Trump’s discourse, his policies, or any specific political agenda of the right or left. Instead, it must be pointed out that the main threat to Jews and to Americans in general from recent events is not an epidemic of racist violence for which there is little or no proof or from the president. The real danger comes from the breakdown of the rule of law that those who lionized the riots and gave the movement that fueled them impunity have engendered.

A country in which both lives and property rights are not respected—and where law enforcement is so cowed by its critics that no one at risk from rioters has any reasonable expectation of police protection—is not one that is safe for Jews or anyone else.

What this Jewish writer fails to mention is that the violent Left is being aided and abetted by powerful Jewish forces that control the media and the governments in these democratic strongholds that are burning to the ground.

Jews created the radical Left in America as early as the World War I era at the time of the Jewish Bolshevik invasion and takeover of Christian Russia in 1915-17.

The Socialist/Communist Movement in America was financed and led by Jews — with some goy fall guys, such as John Reed, to allow for the plausible deniability, “Not ALL communists are Jews.”

The symbol for Antifa is a direct copy of the flag used by Jewish communists in Germany in the 1920s — same people 100 years later.

BLM is also led by Jewish convicted domestic terrorist Susan Rosenberg, along with other Jews “of color” such as Alicia Garza whose birth name is Schwartz.

Even Mort Klein, the powerful head of the Zionist Organization of America, has openly admitted that Jews are “terrified” of BLM.

The radical violent Left is a “Golem” which Jews created to destroy their eternal enemy — White Christian nations.

But now that same Golem is turning on its creator — when will we see Jews throw BLM and Antifa under the bus?

Or is too late for that?