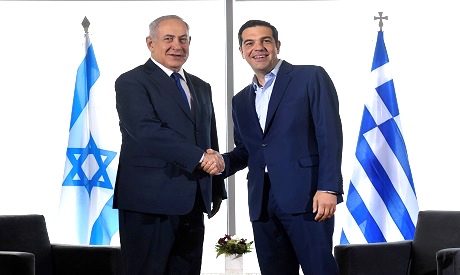 Alexis Tsipras, Greece’s unapologetic communist Prime Minister and friend of Israel’s Bibi Netanyahu, has announced that the 10,000 Orthodox Church employees will be taken off the public payroll as he attempts to remove Christianity as the state religion:

The atheist Prime Minister appeared in a joint televised address in Athens with the leader of the Greek Orthodox Church, Archbishop Ieronymos, stated that priests and bishops will remain on the state payroll but no longer will they be civil servants.

His end goal is to disestablish the Church and last week the extreme-left ruling Syriza party finalised its plans for constitutional reform which will strike all references to Jesus and the Church and define Greece as “religiously neutral”.

The deal between the church and state on Tuesday was described by Tsipras as an “historic agreement”.

“After a long-term, comprehensive and frank dialogue between the state and the Church, a dialogue that took place in an atmosphere of respect and understanding, we now have the opportunity to move to concerted and mutually acceptable and mutually beneficial initiatives related to streamlining our relations,” the joint statement says.

While freedom of worship is still guaranteed in the current constitution, the declaration of Orthodoxy as the presiding religion is contested by globalist NGOs claiming it to be an affront to “human rights” in Greece.

How will these steps toward disestablishing Christianity in Greece go over with citizens/voters in a country found to be the most religious nation in Europe in a massive Pew study conducted over two years?

The study found that of the 96 per cent of Greeks who were raised Orthodox Christian, 93 per cent have said they remain practicing Christians.

Historically, some of the earliest Christian converts were found in Greece as the apostles brought the Gospels, which were originally written in Greek, to places like Corinth and Thessalonica.  And ever since then Greece has faced the threat of Muslim invasions and occupations but always remained Christian until now.  Yes, Greece is being overwhelmed by Muslim migrants, but that is merely a symptom of a deeper malaise which is radical jewish socialism under the guise of “democracy” which has infected Greece like a virus.

State-sponsored welfare has crippled the economy and attracted Muslim and African migrants like flies to a rotting corpse.  And the tourist-based economy is now in free fall because people are afraid of the crime that these migrants have brought with them.  So the next step in destroying Greece completely is to strip the Orthodox Church of its centrality in Greek life.  Christianity and socialism are irreconcilable, as the communist Tsipras knows, which is why the first thing they do when they take power is rid a country of Christianity.